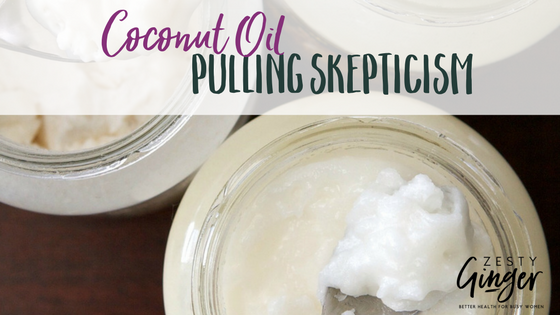 Is The Practice Worth the Hype?

Thanks to Pinterest, I’ve been seeing information on coconut oil pulling for several years now.  My initial reaction? Meh.

I pretty much ignored the idea of coconut oil pulling for a really long time. Here’s why: I feel like the claims proposed for why it was beneficial were just outright ridiculous.  “Oil pulling will clear your skin up immediately.” “Oil pulling will have you down to your goal weight in 1 month.”  “Oil pulling will make a unicorn appear to take you to work every morning.”

I’m actually disappointed that I took me so long to look into it because once I did, I came around to coconut oil pulling really pretty fast.  It didn’t hurt that I had this podcast discussion on detoxing with Megan, whose opinion I really respect. Think this post is Pinteresting? Share it with your family and friends by clicking the image above!

Why I Was A Skeptic and Why I Came Around

Initially, I spent a lot of time researching some of the claims about how coconut oil pulling works. This included ideas like the fact that coconut oil is charged to attract certain ions selectively or the fact that toxins leech out of the lymphatic system specifically in response to coconut oil in the mouth.

I’m not saying I’ll never come around to these concepts if the right data emerged but it made me feel better about coconut oil pulling to scientifically put these ideas to rest.  To be honest, I just don’t understand from a biochemical or biophysical standpoint how these processes would occur.  (If you understand these concepts well, I very much invite you to let me know in the comment section below! I’m all ears!)

Instead, however, the reason I came around to coconut oil pulling is because I did a lot of research of the power of oral health as a marker of our overall health status.

Putting together the fact that I knew the mouth was a high-frequency depositing station of by-products, excreted toxins, and bacteria, as well as the fact that coconut oil’s lauric acid content was an anti-bacterial and lipid-friendly medium, it actually started to make sense why coconut oil would be beneficial for oral health.

In the easiest sense, I began to look at coconut oil pulling as a long-term (aka: 15-20 minute) alternative to mouthwash with all associated benefits: removing bacteria (both chemically and physically), washing out hard to reach debris, and taking lipid soluble by-products out along for the ride.

In the end, I’ve really come to love the process and ritual of coconut oil pulling in the morning.  I feel like I’ve noticed really awesome benefits like less tooth sensitivity, white teeth, decreased coating of the tongue, and better breath.  I may still be depending on my Jeep to get me to my job and back…but the  benefits I have personally noticed are worth it to me.