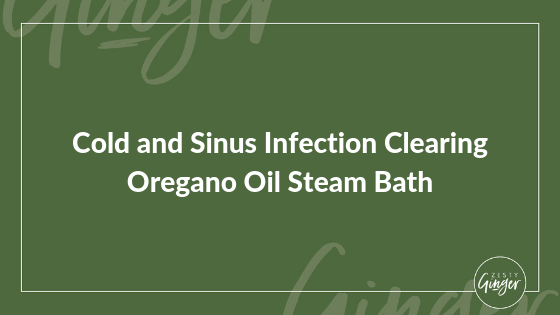 Mr. Dig got sick recently while we were traveling. Just when it looked like he was maybe starting to turn the corner, he started having sinus pain.  We were worried…we had 2 trips planned back-to-back and having to deal with a sinus infection while actively traveling was not something we were hoping to deal with.   Naturally, we decided to attack the problem right away before it got any worse and in the end, this remedy really seemed to make the biggest difference. Oregano oil is the real rock-star in this recipe.  It’s been shown to be anti-bacterial, anti-viral, and anti-fungal…that’s pretty impressive!  It’s also incredibly versatile: it can be taken internally for gastrointestinal infections, as a gargle rinse for throat symptoms, and topically for a variety of skin infections.   I have used oregano oil in a Neti Pot for a stuffy nose before with great success but I didn’t figure that would be a good method of delivery for sinus problems.  (Conversely, you can use the steam method for either colds or sinus infections…I imagine it would be great for kids with colds because it is much less invasive than the Neti Pot or sinus sprays.)

I added peppermint because it has been shown to help decrease congestion in the nose and sinuses…it also just smells really great (and oregano oil does not).  I added calendula because it’s amazingly calming for skin and mucous membranes so I figured it’d be the perfect addition for inflamed noses.   I added lemongrass to improve the scent of the mixture so that’s an optional ingredient.

2.  Place the lemongrass, calendula, and peppermint into the mixing bowl.

3.  Pour in your boiling hot water into the mixing bowl and stir a few times.

4.  Add in your drops of oregano oil and stir a few times again.

5.  Grab a towel and sit with your face leaning over the bowl. Place the towel so that it’s covering your head and the bowl…this keeps the steam from escaping and concentrates it on your face. You’ll look something like this: 6.  Stay like this, breathing in the steam, for about 10-20 minutes.  Follow your steam bath with a really good nose-blowing to get all the gunk you loosened up out!

What’s your superpower sinus clearing remedy? Let me know in the comments below!