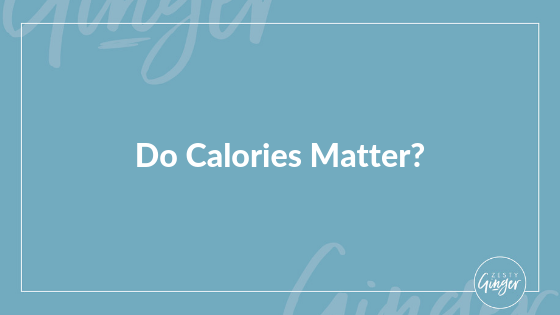 Today I wanted to address a question I hear from people all the time: do calories matter?

Now, this question has been addressed elsewhere on the internet but I wanted to give my two cents on the topic, since I think it’s a very important one and there is an incredible diversity in information out there when it comes to calories. Some people say that tallying calories and making sure to eat less of them than the amount you’re burning is all that counts.  I definitely used to prescribe to this way of thinking when I was in college because it’s an idea that’s very easy to conceptualize and do something about.  It becomes about as easy as getting an app on your phone that counts calories and getting a fitness tracker on your wrist. Plus, it’s kind of a nice thought since you can technically eat whatever you want provided that you burn enough calories to offset that. (Like eating a pint of Ben & Jerry’s a night because you’re training for a marathon.  True story!  I was skinny…but I wasn’t healthy.)

Other people on the internet swear up and down that calories don’t matter at all and that it just comes down to food quality only. This is also a compelling idea since the concept of eating any amount of food you fancy, provided it’s the right kind, is a pretty sweet deal.  Half a paleo carrot cake? Been there, done that.

So in my opinion, the reality is somewhere in the middle.  (Have you noticed a trend? I rarely find things to be black and white.  The complexity of the world is what makes it fun to study, right??)

I believe calories matter. But I also believe that much of the overall status of the body affect how these calories are processed, allocated, and utilized.

You might be wondering why I have a car as the blog post picture.  That’s because I tend to use a car as an analogy for how I think about calories in the body.

I liken calorie input into the body to gas input in a car.

Theoretically, fuel is fuel and it should work the same in just about every car.  But many other aspects to each individual car will determine how the gas is used.  Some cars will get just a few miles to the gallon while others can go impressively long distances.  Some cars will have a broken gas sensor so will say you have less gas than you really have while others leak gas out the bottom.

All of this is determined by many factors such as how old the car is, how well it’s been taken care of, and what current problems it has.  Additionally, there can be many extra factors that are modifiable and change over time.  For example: you can have a well running car whose gas expenditure increases by putting tons of heavy objects in the trunk or whose performance decreases in the colder weather.

Of course, this analogy isn’t perfect since often we’re talking about storing excess calories and the harm that comes from that whereas the car can only really use up the fuel…but I think it works to illustrate some important points.

The way we process calories is affected by the overall state of health in our body and there are many ways to modify the outcome.

For example, you actually limit calories to the point that your body begins to hold on to each one as much as possible. This is part of the problem with yo-yo dieting and why it often leads to increased weight gain in the long term. (Of course, if you keep up the calorie restriction long enough, anorexia is the disease that manifests.)  Similarly, we’ve probably all heard of the hypothyroid person who eats less and less food while still maintaining or gaining weight in the process.

However, just because there are factors that change how calories are processed and utilized in the body, doesn’t preclude the fact that calories still have effects on weight to an appreciable extent.

I think we’ve all experienced small (or big!) gains in weight during the holidays where calories are exceedingly abundant and have lost the weight with resumption of our normal eating habits.  Other physiologic changes can certainly happen over this period, but high caloric intake–I believe–is a big part of the phenomenon.

Ancestrally, it makes sense that this would be true. The body is geared to store excess energy for times of hunger and calories are our way of measuring the input we have.  It’s just that the body will process that input in various ways.

Some of these points can be a little conceptual so I’ll just tell you what I generally do.

I don’t count calories for the most part.  I eat nutrient dense and nutrient diverse food when I’m hungry and stop when I’m full.

However, when I first figuring out how to eat a paleo-type diet that suited my needs the best, I did quantify my calories for just a few days to make sure that I was eating enough calories and not overdoing it. I’m about 5 foot 9 inches and I generally get anywhere from 1800-2400 calories. Of course, there are really busy work days where I probably get less and days where I eat a ton of food and go way over.  But know that I’m getting about what I need by eating the food I have on hand on a daily basis, I can just eat it without giving calories much extra thought.

I believe that both the type and the amount of calories we intake matters.  While it can be frustratingly complex and easy to wish that it was more straightforward, I actually think it’s a good thing.  This just means that we have many variables to play with when looking for a certain outcome…and I’d take more options any day!