Syncing with Your Cycle to Address Endometriosis Naturally 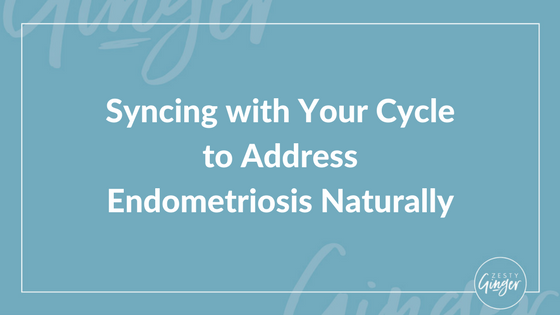 Studies that have attempted to establish a number for the prevalence of this disease state have ballparked that between 3-5% of the female population suffer from it!

What’s even more alarming is that the incidence of endometriosis has been estimated to be closer to 40-50% in women struggling with infertility.

These numbers are staggering…and a real threat to female health and fertility!

Endometriosis is a tricky for a couple reasons.

For one, we don’t have a super clear idea what actually causes endometriosis.

Scientists and physicians who study the disease have found evidence to support that the following factors may play a role:

In the murky real-life reality that we live in, it’s likely a combination of all of the above…or some combination that’s unique to each individual woman.

The other thing that makes endometriosis difficult to deal with is how hard it is to actually diagnose.

The definitive diagnosis of endometriosis has to happen with actual visualization of the uterine lining growing outside the uterus. This means that a surgical procedure has to happen, even if you don’t intend to intervene on the tissue itself.

Because of this, most women with pelvic pain, spotting, horrific periods, and hormonal imbalances are simply put on (you guessed it!) birth control…and basically told to suck it up.

Even as an MD herself, it took close to TWENTY years for Alex to be diagnosed with endometriosis despite years of severe pelvic pain and periods so bad that she threw up each month.

By the time it was diagnosed, the endometriosis had destroyed the large majority of her ovaries, all her pelvic organs had fused together, and there was so much damage to her fallopian tubes that they were largely decorative. (We say that last part very much tongue in cheek. The right fallopian tube was actually resected during surgery because it had dilated to 5 times its normal size.)

This all sounds SO GRIM!

And it’s true. It IS grim. But that’s not what we want to focus on with this post.

How Syncing with Your Cycle Can Help with Endometriosis

Over the years of struggling with endometriosis personally and working with women who suffer from this debilitating disease, together we’ve come up with a new approach: intervening on the root causes of dysfunction by living (and treating problems) in sync with our natural feminine cycles.

We recognize 4 distinct phases of the monthly menstrual cycle. You can read about each of them over here.

By looking at what the body is NATURALLY trying to balance, create, and destroy during these 4 phases of the menstrual cycle, we can begin to live and support our bodies in a more harmonious and effective way.

When it comes to endometriosis, this approach helps to dig deep into the dysfunctions that set women up for developing this disease and begin to support the body in healing itself.

No birth control bandaid for us!

Two major aspects of resolving endometriosis naturally is focusing on optimizing inflammation and detoxification at specific points in the cycle (phases 1 and 2 for inflammation, phases 3 and 4 for detoxification). This allows the endocrine system, inflammatory cascades, blood sugar regulation, the immune system, and the adrenals to be supported to function to the best of their capacity.

Of course, each of these 2 large categories can be broken up into many specific ways.

This is why we’ve created our Wild Feminine Cycle Guide that tells you EXACTLY what you should be focusing on, working on, and supporting at each of the 4 phases of your cycle. And there are countless articles you can read throughout this site that help make this process a lot more effortless.

This ranges from creating elixirs that support our natural detox organs to moving your body differently to the way you approach your emotional and mental health each month.

It also means that you focus on fueling your body differently over the 4 phases and interacting with your health in more compassionate and gentle ways.

It ends up being a whole life approach overhaul…but in a way that feels manageable because you’re flowing with the current of your cycle instead of miserably trying to make it through your next painful period!

Because endometriosis can make you feel fearful of not having children, fearful of when you’ll finally end up having a hysterectomy, and fearful of your body in general due to lack of control, syncing more naturally with your hormonal cycle can be a HUGE weight off your shoulders.

Click here to grab our free Wild Feminine Cycle Guide to get started with this new approach to treating endometriosis naturally!