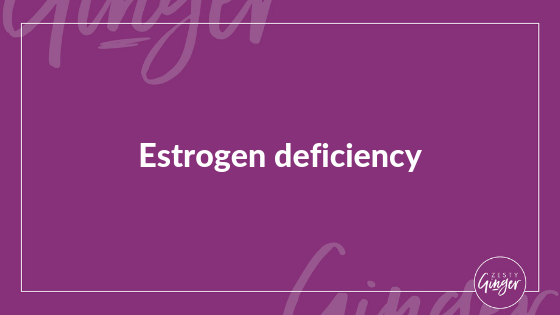 Even though estrogen dominance is a more common hormonal imbalance, estrogen deficiency happens frequently and can have incredibly uncomfortable symptoms. Low estrogen levels can potentially cause perimenopause, but we’re learning that more young women have this issue than previously thought.

Estrogen is made in the ovaries and to some degree in fat tissues. Anything that interferes with the normal hormonal signaling cascade at the level of the ovaries can decrease the production of estrogen.

All of these underlying issues act at the level of the ovaries and the rest of the hypothalamic-pituitary-adrenal-ovarian axis to throw things off kilter.

Fat tissues in the body are partly responsible for the creation of balanced estrogen levels in females. Women with extremely low body fat percentages or who exercise intensely can see a drop in their hormone levels. This is the reason why we have ladies who modulate their exercise routine around their cycles. Exercise goals can remain the same–the point is to acknowledge the built-in feminine cycles we have.

Low fat intake in the diet–thanks to decades of the “low fat” craze–is also a cause of estrogen deficiency.  We love a tablespoon of coconut oil or coconut manna for this reason before bed and adding high-quality fats to our daily meals.  By giving the body the building blocks to create hormones, it’s a simple way to fight symptoms like low libido, chronic fatigue, and irregular periods.

Here’s a complete list of symptoms of estrogen deficiency:

You’ll notice that much of this list looks an awful lot like the one for estrogen dominance!

Don’t forget: symptoms alone aren’t a great way to figure out what’s going on. There’s too much overlap and variation between women to make this quite so straightforward.

I (Alex) expected to have estrogen deficiency because of my long history of endometriosis and low ovarian reserve. But my DUTCH test results didn’t show that this time around!

I had several issues that made me more of a target to develop estrogen dominance (like leftover artificial hormones from IVF and gut dysfunction leading to poor liver detoxification from my Celiac disease).

However, I also think I didn’t drop my estrogen levels as low as I would have expected, because I’ve done so much of the lifestyle work in this department.

This is true for all hormonal imbalances, but estrogen deficiency in younger women generally requires even more of a focus on stress management and lifestyle considerations.

As a society, we like to think that being go-go-go all the time makes you a great employee, boss, mother, and partner, but the truth is all of that physical, emotional, and mental stress acts as a powerful damper on our hormonal systems.

Quite frankly, most animals are built to avoid pregnancy during stressful or resource-poor times.

If your body is always getting the fight-or-flight input from your central nervous system (the brain and spinal cord), it will downregulate all functions having to do with repair, regeneration, and creation, resulting in low estrogen levels.

Meditation, breathwork, cutting down on caffeine/alcohol, and neurofeedback can make HUGE differences in helping downregulate a worked up central nervous system, which re-establishes normal hormonal levels.

Of course, there are plenty of supplements that can support this process as well, such as supplemental neurotransmitters, flax seeds, L-theanine, maca root, and magnesium. But just like in estrogen dominance–and all hormonal imbalances–it’s first important to figure out what specific imbalance is occurring in the rest of the hormones that interface with estrogen.

Upcoming topic in the Series

Our discussion of hormonal imbalances wouldn’t be complete unless we discuss the role of functional medicine. After wasting multiple years trying out random supplements, going from practitioner to practitioner, and never really getting anywhere, we genuinely believe in the “test, don’t guess” approach.