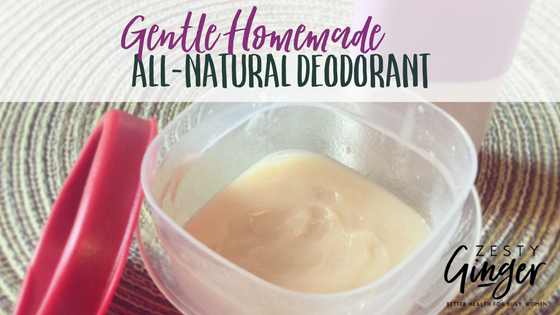 I”m fairly sure I don’t have to explain why store bought deodorant isn’t the best for you (you know, aluminum, chemicals, etc.) but I’m 100% sure that no one wants to be stinky.

I was really reluctant to get away from my industrial-strength, anti-antiperspirant and that’s most likely thanks to what Mr. Dig called my “bomb-sniffing-dog nose”.  The hypothetical shame of being “that smelly girl” at work kept me from trying a recipe for a long time.  After overhauling most of my routine, however, throwing away my beloved Clinical Strength deo was the only thing really left to do. I finally decided to go cold-turkey and tossed the old chemical-stick.  I made an easy recipe I had found online and started smearing away.  In about a week or so, I unfortunately started to itch and break out in my armpits.  I wasn’t “that stinky girl”…I was “that weird chick scratching her armpits”.  Not pretty, yes?

As a result, this recipe was born.  It replaces some of the odor-busting baking soda in most recipes with some uber-absorbant bentonite clay and adds a few more moisturizing butters in place of pure coconut oil.  Not only have I never had a problem with breakouts after starting this deodorant but I think it works even better than the old version.

1.  Place the coconut oil and mango/shea butters in a jar like so:

2.  Next, you’ll use a double broiler (I use a jar inside a small pot filled with about 2 inches of water and placed over medium heat….see picture below) to melt the ingredients together and combine them well.  You can use a microwave if you want but I think it works better with a double broiler.  If you’re just using coconut oil, you can just melt the coconut oil either in the microwave or by placing your coconut oil jar in a tub of hot water.

3.  Once all the oils and butters have melted together, place the oils inside a bowl you can easily mix in.

4.  Mix in your baking soda and bentonite clay into your melted oil and butters like so:

5.  You’ll want to stir occasionally as the mixture cools.  Once it has become viscous enough to not have the baking soda and bentonite clay sink to the bottom, transfer to the small jar you’ll be keeping your deodorant in.  I use a small tupperware container like this:

6.  After you transfer the mixture, add in your essential oil(s) of choice and mix well.

7.  Let cool until solidified and store in a dark/cool place (see below on details).

1.  If you place the deo in a small tupperware, you can just scoop out a bean-sized dab of it with your finger and apply to your armpit.  It sinks in within a minute or two.  Since I want it to be soft enough to scoop, I keep mine in my bath room.  I suggest doing it this way if you do a decent amount of traveling because it helps avoid any melted-deodorant-disasters en route.

2.  If you place the deo into an old deodorant container, I suggest keeping it in your fridge so that it stays entirely solid and then use it just like regular deodorant.  (If your house is very cold, you might not need the fridge step.)