Getting On Your Nerves 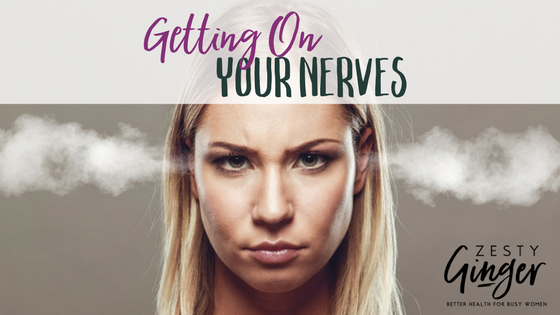 It’s no secret that nerves play a role in pain.  Unfortunately, most people don’t fully understand how nerves work.  Moreover, most people (including some professionals!) don’t understand that it’s not only nerves that play a role in pain but the entire central nervous system that is involved. (This is especially true when we’re talking about chronic pain, which is most commonly defined by pain that persists for over 6 months.)  Even further, it’s important to understand that you can’t have pain without having the entire body getting involved! This includes the autonomic nervous system, the hypothalamic-pituitary-adrenal system, as well as the endocrine system.  Though that may be seem obvious that the entire body is linked into this process, the intricacies of this fact are very complex and, honestly, not completely understand by anyone.  Fortunately, this is a “hot topic” in the research world, with new data coming out all the time.

This topic is one that I’m incredibly interested in…and, honestly, very personally invested in.  (If you haven’t read my story, you can find it here.)  As a result, pain, especially chronic pain, is something I hope to discuss at length in this blog.  And I know that I’m not the only one interested.  In fact, it is estimated that roughly 100 million Americans have a chronic pain problem at any given time.  Compare that to the estimated 25.8 million Americans with diabetes, and you can gain an appreciation for how big this problem is!  Even scarier is the fact that it is estimated that Americans spend close to $600 billion dollars annually on chronic pain treatment and management.  Yup, that’s billion with a B.

So, with all that in mind.  I thought it would be extremely high-yield and important to discuss the basics on how nerves, neurons, and the central nervous system work. (This is going to be a simplified version, of course.)  All other blog posts on pain will be based on the foundation established here but we’ll build and expand on the details…so don’t worry if you don’t get it all on the first pass.

In order to get to the good stuff, we have to first talk about some anatomy.  Most basically, let’s first address the difference between a nerve and a neuron.  Luckily, most people have heard about nerves (after all, what would our families get on if it isn’t a nerve?!) so understanding neurons is pretty simple.  Neurons are simply smaller units that makes up a nerve.  The neurons are bundled in clusters, separated by ligamentous (aka: connective) tissue to make up an individual nerve. Onward with our anatomy lesson! The parts of the neuron can be simplified into 5 parts (see illustration below): We’re bringin’ ‘er home, folks! So stick with me.

The last part of the neuron that you have to understand is how the parts allow for signaling to happen. Neurons have receptors all over the surface of the cell (but you can just imagine them on the side that has the nucleus, see picture below).  These receptors are shaped to accept certain messages that are coming into the neuron…you can basically think of the messages (or messengers) as “keys” and the receptors as “locks”.

Once the messangers act on the receptors, it causes a cascade of actions that directly effect the nucleus. (Basically, the parts of the cell body run to the nucleus and tell it everything that’s happening.) The nucleus deciphers these incoming messages and comes up with a response.  This cellular “response” is transmitted down the axon and causes the release of various other messengers that then go on to act on the receptors of the neighboring neuron. Phew! That seems like a lot.  But basically, neurons function to pass messages to and from the brain.  The way they work, in the simplified sense, is like knocking down dominos…once you get one going, it’ll keep triggering all the others in the line.

Neurons In The Body

So now that you know you know generally how the neuron works, we can look at the neuron in the context of the whole body.  (Simplified, of course. Don’t go running out on me.)  This stuff is best explained by way of an example. Imagine for a moment that you’ve stubbed your toe (gah!). What feels like instantaneous pain to you is actually a very long and intricate sequence of events that happens inside your body.

Lets start at step #1 on our neuron-man illustration above.  When you hit your toe against a hard object, the nerves in your toe get the message first.

This message travels through the length of the neuron and transmits that message to the second neuron that starts in your spine (step #2).

That neuron that relays that message to the brain (step #3). (Like I said, dominos.)

Step #5 will be for the brain to send an outgoing message to a neuron that travels down to your spine.

There, it will relay the brain’s message to the neuron that goes down to the big toe (step #6), and your toe will finally get the message (step #7). More than likely, the message will be “Watch where you’re going, Butterbreath.” but as we’ll see later, it all depends on the brain’s priorities and habits.

Well folks, you’ve just completed half a course in neuroanatomy.  Next, we’ll cover how the brain controls this entire messaging system.