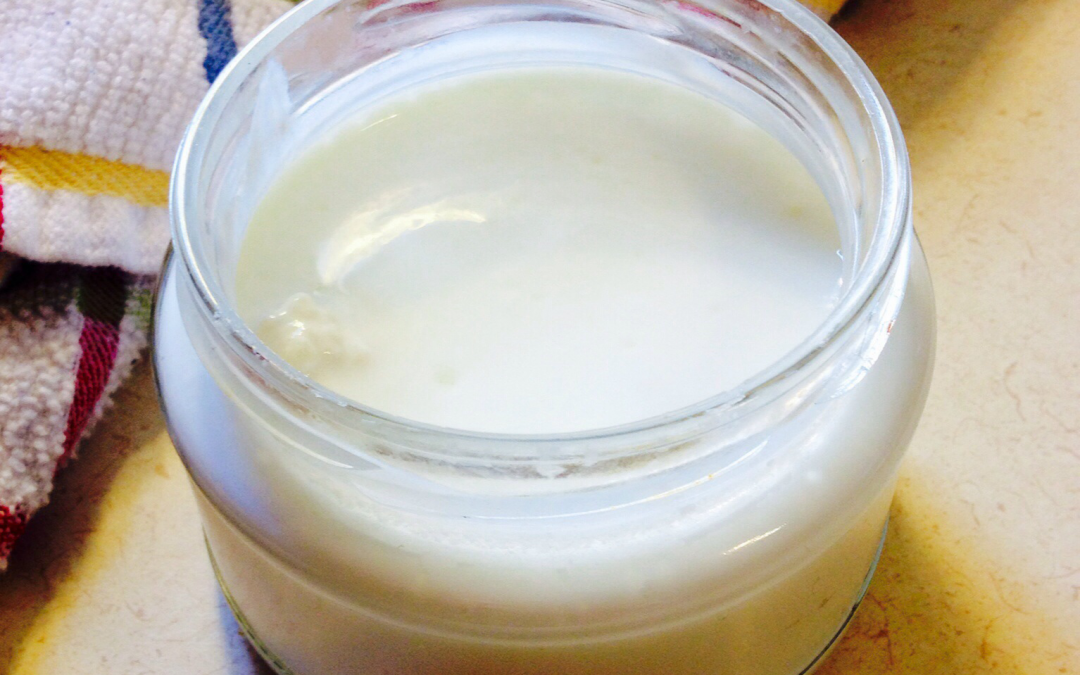 I think foods containing probiotics are so very cool (nerd alert!).  The concept of beneficial bugs working synergistically with us to digest foods and help our gut epithelium with cell signaling has always made a lot of sense to me from an evolutionary perspective.  From a practical viewpoint, I’ve seen massive improvements in my digestion (and on a related epithelial note, amazingly clear skin!) and energy levels since making a concerted effort to include more probiotic rich foods in my diet.

At first, I was buying a lot of raw, whole milk kefir and coconut kefir but it was costing me an arm and leg at the quantities I was drinking daily (really just a cup but that’s about half a bottle from the store…and that bottle costs $8).  Fortunately for me, my mom got some milk grains from a friend and was kind enough to pass some down to me.  I quickly realized that making your own kefir is SUPER simple and very cost effective.

Note on dairy intolerance: when I was first starting to figure out my digestive woes, I was using the “strict paleo” diet as an elimination diet which meant that I wasn’t drinking kefir but was making raw sauerkraut instead.  I then proceeded to making coconut milk kefir for a few weeks (I’ll share my recipe soon) until I knew that was working.  Later, I moved to making goat milk kefir because it’s easier to digest than cow’s milk and once that was working out, I moved on to whole, grass-fed milk (raw if I go to a neighboring state where it’s legal).  What I’m saying is that there are many options for homemade kefir (and getting probiotics in general) so don’t give up hope if you can’t have the traditional cow’s milk kefir right now.

Note: if you’re starting with fairly robust grains, they’ll make ready-t0-drink kefir the first time around.  If you let it sit for 24 hours and it’s still not the right consistency and/or taste, pour out the milk and start again from the beginning.  For grains that need a little love, you may have to do this several times before they start producing proper kefir.  Then repeat these steps for all subsequent batches.  It gets to be a breeze after the first few times!

1.  Place your hydrated milk grains in a cup (or, if you’re continuing from a previous batch, strain the grains out from your ready kefir) .

2. Rinse well with lukewarm water from the faucet.  I use a cup instead of a sieve because I find it’s easier not to break up the milk grains or lose them down the drain.  I basically just fill up the cup with the water, hold the milk grains back with my fingers or a fork, and dump out the water.  Then I repeat until the water runs clear and the milk grains looks like this:

3.  Place the milk grains in a small jar like so:

4.  Fill the jar with 1/2-1 cup of milk.  The amount of milk will vary on the size of your milk grains.  The way to know if you need to add more milk is if you’re getting finished kefir in less than 24 hours (unless that’s what you want…just make sure you then make a fresh batch shortly after it’s ready so that the milk grains always have plenty of “food” to ferment).

5.  Place the lid on the jar very lightly without screwing it on so that the milk and milk grains can “breathe”.   You can also using a cheesecloth and a rubberband to cover the top but I like having the lid because if I ever want to stop the fermenting process (like when I go on vacation), I just screw on the lid and stick the entire jar in the fridge.

The finished product looks runny but thick enough to stay on a fork when you dip it in, like this:

That’s it! I drink mine plain but when I’m giving it to Mr. Dig or my little sister, I’ll sweeten it with a bit of honey to make less tart.  (For kids, apparently, adding a swirly straw to any drink makes it instantly more palatable.)