A Step-by-Step Process for Quitting Coffee 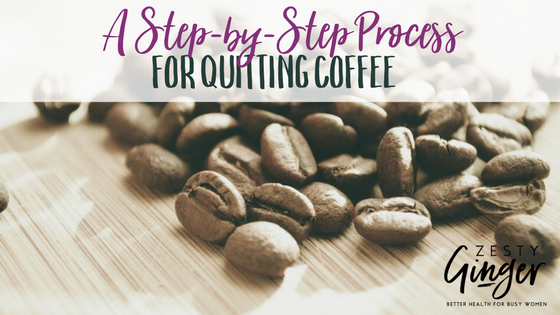 If you’ve ever seen Scrubs or Grey’s Anatomy, you know that the medical field runs primarily on coffee.  24 hour shift? Grab some coffee. Got shoddy, pager-ringing, interrupted sleep all night?  Get some coffee. And it doesn’t stop when you’re out of the hospital either.  Going on a trip? Make sure you plan out where you’ll stop for coffee.  Spending the night with family who doesn’t drink coffee? Make sure you pack your own…or face imminent energy catastrophe!

Coffee wasn’t just a habit for me.  It was a tool that I used to deprive myself of sleep and push myself to do more than I should have been doing.  It wasn’t until I had pushed myself into complete endocrinological dysfunction that I was forced to stop and reconsider what I was doing to both my mind and body.  Even then, coffee was one of the last things to change in my life.

I had stopped cold turkey once when I was in college and I ended up with a horrendous headache that lasted for 2 weeks. Naturally, I wasn’t eager to have that experience again, especially given that I was drinking more coffee than ever.

So I decided to do a step down “protocol” that I was hoping would ease my transition…and it worked like a charm! I now either drink green tea, black tea, fruit tea, or some kombucha after I wake up…and on busy mornings, nothing at all! What a huge change this has been for me when I was previously the girl who packed a coffee grinder and whole beans while going in a vacation so that I could actually stay awake for the trip! So I wanted to write out what I did to share with everyone…and that’s what this post is about.

Disclaimer: I don’t think coffee is bad empirically. It’s just that I was using coffee poorly…and that’s the problem I’m addressing in this post.

The Drinks and The Caffeine:

Let’s start by getting some rough numbers of the amount of caffeine we can expect to get from certain drinks.

1. Coffee–ol’ faithful contains about 95 mg caffeine in a regularly brewed 8 oz coffee mug. (Note: I know this grossly underestimates the caffeine content of a Starbucks Venti Vanilla Latte but we’ll account of this later…we’re just getting an idea of how much of a difference between the drinks there is at baseline.)

3. Black tea–contains about 45 mg of caffeine per 8 oz cup

5. Fruit teas–most have no caffeine at all

Important Points Before We Start:

1. Spend as much time on each “section” as you need. It all depends on how your body is going to respond to these changes so just because something took me 2 weeks doesn’t mean you’ll have the same time frames…just pay attention to how you feel.

2. Intimately related to point #1 is that I highly recommend not pushing yourself into withdrawal symptoms by trying to go too fast. If I ever felt headache-y, flu-like, or just felt outright exhausted, I would add in a bit more caffeine. This is because caffeine withdrawal is a physiological process. It’s not only a pain figuratively but those symptoms are a sign from your body that it isn’t keeping up with what you’re asking it to do. Be kind to it!

3. In this process, your body needs to make some changes. This involves up-regulating receptors and making new proteins…it’s not small stuff! So show it a little love throughout the process. Try to get as much sleep when you can, eat the most healthful foods available to you, and focus on stress reduction. I know you’ve heard this all before but it’s extra critical in times when you might not feel up-to-snuff as it is.

Finally, let’s get into how I actually went about doing this.

I started by replacing 1 of my cups of coffee with a cup of Yerba Mate. If you’re used to having a mega-caffeinated coffee drink, such as something you’d get from Starbucks, you can compensate accordingly and replace it with 2 cups of Yerba Mate…or just 1 really strong cup.

(Remember, we’re trying to step down gradually! So you’re really just trying to come in at a lower “dose” than you previously were.)

I stayed at this for about 2 weeks until I got used to it and then I replaced another cup of my usual coffee with some Yerba Mate. Again, I did that for another 2 weeks. Repeat until I had switched over all the cups of coffee I would have drank with cups of Yerba Mate.

Once I was comfortably transitioned to Yerba Mate (and sleeping a little more soundly, may I add!), I started replacing each cup of it with black tea. This time, it took me only about a week before I felt like I had my usual amount of energy so this part went a little faster.

After fully switching over to black tea for a while, I started replacing each cup with green tea. Within a couple weeks, I had switched over to only green tea.

At that point, I started to throw in some fruit teas or days where I didn’t drink anything besides water. I had one day where I got a headache so I went back to green tea for a couple days before trying again…this time with success! I think I just jumped into it too fast.

I will say that I’ve had small amounts of coffee since doing this without experiencing any problems the next day…but I have a suspicion that this may be dose related so you may have to do a miniaturized version of the step down process if you run into problems.

My caffeine intake has fluctuate wildly throughout my life and I’m in no way saying that I’ll never drink coffee again. But as with everything, it’s always nice to have a back-up plan for when you get a little off track and this is the roadmap I’ll follow when I need it!

You can modify it to reflect your needs as you see fit…that’s what really matters!