How ‘No Pain, No Gain’ Applies to Health 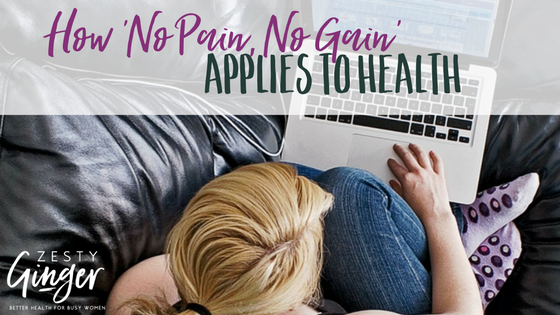 The message of ‘no pain, no gain’ is so prevalent in our culture that it’s become a sort of given. You’re supposed to work out until you palms bleed and until you can no longer use your legs to lower yourself into the toilet, right? And knee repair surgeries in 20 year olds is no longer a surprising and rare event. This concept is worn as a badge, a sign that you’ve earned your stripes and are officially a bad son of a gun.

While this started in training cultures such as the military, police academies, and in athletic training grounds (where it may make a great deal of sense…some of these people are training to deal with life and death experiences) this idea has leaked out into all types of other venues. Failing to take any vacation days per year for career advancement, severely limiting your caloric intake, and pulling all-nighters in the name of education are just a few examples of how this happens.

What’s more is that this concept has infiltrated and permeated the health culture as well. I’ll argue in this post why this event is detrimental to the actual health advancement of our culture and why it can be so incredibly beneficial to actually listen to your body instead of trampling ahead with what your big brain went ahead and decided.

Though this is uncharacteristic for me, I’m going to go ahead and take it one step further: I believe that taking the ‘no pain, no gain’ approach to healing yourself is a terrible idea.  The central nervous system is no fool and carefully monitors every input you give. You can’t starve yourself and then “eat a nutritious salad with lean protein” as a way of balancing things out and you can’t detox hard until you physically can’t get out of bed and expect to come out on the other side unscathed.

Let’s talk about some of these common ‘no pain, no gain’ thought patterns when it comes to health.

Side note: there’s no judgement here. I’ve been guilty of nearly all of these things I bring up. And I therefore know it’s not an easy habit and mind-pattern to break. But in my opinion, it’s definitely worth thinking about and doing a little introspection on. Secondly, there’s a time and a place for going all out for a health cause…just make sure it’s worthwhile! Since I already mentioned it, let’s briefly dig more into detoxing. For the most part, detoxing quickly and powerfully has become a sought-after phenomenon. Since people feel awful implementing a detoxing regiment, it can be easy to look at these terrible side effects and say, “See? It’s totally working!”.

I argue that this is more indicative of the fact that we still have a hard time believing that our detoxing interventions are actually effective. And I’d argue further that this happens because we don’t always look into or fully understand how these interventions and organ systems work.

However, our lack of belief on the subject has nothing to do with how our body’s react. For them, the inability to keep up with the rate you’re detoxing and removing impurities at is really taxing and depletes nutrients, cellular energy, and can even damage/overload previously intact healthy pathways.

I wrote an article on the subject of detoxing appropriately internally here. Realizing that you don’t have to miserable to improve your detoxing efforts is very liberating and can honestly make your life way more pleasant.

Elimination diet have become quite popular and for very good reason. Our current food sensitivity tests are quite honestly fairly un-insightful (to put it nicely) and learning how YOU feel with certain foods can transform your gut and overall health.

And yet, people seem to take a nearly delighted masochistic approach to cutting down their food choices. It seems really hardcore and dedicated to only eat 8-10 different foods for months on end…look at how healthy you’re getting! (I say, tongue-in-cheek.)

Between the paleo, AIP, SCD, FODMAP, and low glycemic elimination diets out there, you can easily get really limited by cutting out way too many foods. That being said, however, I don’t believe it’s the cutting foods out that’s the problem but the FAILURE TO ADD MORE FOODS BACK IN. Let’s say, for example, that the goal is to take away white potatoes. Most people go to sweet potatoes and stop. I vote that trying to add in yucca, rutabaga, or radishes should also follow. This is a tiny example but the idea behind this concept remains.

Now, I certainly understand that when you are really getting down on food be ahse you’re struggling with terrible digestion issues, this can be really difficult. And yet I’d still make the case that the attitude of “expand, expand, expand” when it comes to nutrient profiles is much healthier and less mentally taxing than “limit, limit, limit”. Taking out the hero approach to your elimination diet maybe gets you a little smaller badge to wear in the forums…but I’d be willing to bet that’s you’d be a happier person in general. And isn’t that what health is all about?

I mentioned this earlier but it’s worth talking about a little bit more. Perhaps more than all of the other things, I’m guilty of doing this myself. Overexercising and prioritizing pushing yourself over giving yourself some time to relax is a form of stress, as your body sees it. The lack of recovery, the depletion of nutrients and cofactors, and the up ramping of catecholamine (“stress hormone”) release at the expense of other hormones are just some of the negative effects of the ‘no pain, no gain’ approach to the weekend warrior exercise routine.

This may not apply to professional and serious athletes who have the time, the trainers, and the eating routine necessary to power through high-intensity and frequent exercising schedules. For the rest of us, I argue that this isn’t what’s happening on a reliable basis.

Given the extreme prevalence of hormonal issues, adrenal fatigue (aka: hypothalamic-pituitary-adrenal dysfunction), and exhaustion out there, I think the numbers often speak for themselves!

Now, you’re probably thinking I’m going to launch into a discussion on the power of saying “no” and not loading up your social calendar.  And while I think that’s a fantastic topic, I’m talking about overcommitting in another way here.

There are a lot of really great health things to do out there…yoga, meditation, a gratitude diary, nutrient journals are just some good things you hear about all the time

However, a lot of us try to do so many of these “great things” that in the end, we’re kind of just completely miserable from doing them all! If yoga, meditating, or starting a journal is in the cards for you, that’s so great and I’m sure you’re going to see amazing results from doing them.  But if adding in some of these things is going to stress you out, just be another thing on your to-do list, or if you just plain don’t enjoy doing any one (or some) of these things, give yourself the permission to let go of them.

The ‘no pain, no gain’ approach to internal happiness? It just doesn’t really work so well.

In writing this post, I was in no way setting out to bash any health ideas.  Instead, my point was to remind folks that health is a way of life, a way that you show yourself some love.  Do your best with taking care of you…but really focus on just taking care of you!