How Our Internal Environment Affects Neurons 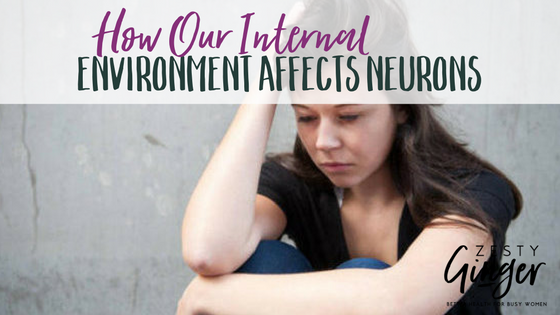 Now that we’ve learned about how neurons generally work in the body and how the brain can regulate neurons, it’s time we talk about how the rest of our internal environment can effect neurons.

We already hit on a lot of the general causes in the post titled How Our Brains Regular Pain.  The main takeaway from that post was that our brain decides how to interpret incoming messages from the neurons and modulates the pain response appropriately.

The end result is that our hormonal and molecular milieu at any given point (all governed by how our brain is reading our surroundings) also causes how the neurons behave.  The way in which the neurons react to these forces is by 1) changing the receptors on the neuron and 2) changes the outgoing messages being created by the nucleus. (For a review of anatomy, it’s in the post called Getting On Your Nerves.)

Let’s take a look at the following illustration: Here we can see that the brain is interpreting that our tissues are somehow in danger and that protective action needs to be taken.  The molecules that rev up the body’s sensitivity will act on the neuron’s nucleus and nudge it into creating either a greater quantity of receptors or different types of receptors.  The action on the nucleus will also prompt it to change the amount or type of messengers that the neuron sends out to neighboring neurons…so that the body can have a heightened awareness of what is happening.

For the sake of simplicity, I’m going to distill the hormones and molecules that can create this response as “stress”.   In reality, stress can be emotional or physical.  It can be from lack of sleep, poor nutrition, over-exertion, or anything that makes your brain feel that it needs to be extra careful about its safety. (Unfortunately, chronic pain is one of these factors, which is why chronic pain can be such a hard cycle to break.)

The cycle of stress and pain is illustrated below: #1) You start with some type of stress that your brain perceives can harm you.

#2) Your body then mounts a stress response in the form of hormones and various other molecules.  This includes hormones from the hypothalamic-pituitary-adrenal system such as cortisol and sex hormones from the endocrine system (as well as all their precursors).  It can also include pro-inflammatory cytokines created by an immune system that is revved up by the brain’s perception of danger (or by direct immune response…an example that most people are familiar with is that food sensitivities can set off the immune system).

#3) These compounds then go on to act on the neuron’s nucleus to increase/modulate receptor activity (see the first illustration).  This allows the neuron to be extra sensitive to anything that can stress or harm the body further.

#4) Often, this increased sensitivity means physical pain, because this ensures that the brain can keep you from harming yourself further.

#5) Increased pain and sensitivity will increase the “stress” signals to the brain, and the cycle continues.

What Does This Mean?

The best part of this entire thing, if you’re currently someone who struggles with chronic pain, is that this process is a fluid and ever-changing phenomenon.  The number and type of receptors and messengers your neuron’s nucleus makes is all dependent on the forces acting on it.  Let’s imagine a person who has persistently high levels of cortisol due to a very stressful work environment which constantly keeps their brain vigilantly tuned to be on the look out.  Now let’s imagine that this person finds a new job…and their cortisol levels plummet.  It makes perfectly good biochemical sense that their neurons will recognize this drop in cortisol and respond by changing the receptors and messengers produced!

In short, your body isn’t “doomed” to stay a certain way.  It just needs the right inputs for it to do so!  We’ll discuss all of the different pertinent inputs in future posts.  For now, take a deep breath.  Your brain is trying to protect you, and it’s willing to work with what’s going on around you!