How The Brain Regulates Pain 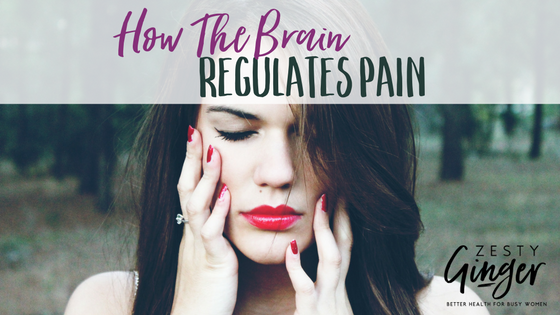 In my previous post on nerves, we learned some basic anatomy and how neurons, nerves, and the central nervous system work.  Next, we’ll need to get into how the brain modulates some of these signals based on what it believes is best for you…and, how pain plays a role in all of this. Let’s review a bit from our last discussion in the Getting On Your Nerves post. Neurons send messages from the tissues to the brain and then back down again, as you can see illustrated in our neuron-man above (start at #1 and follow it back down to #7).

The thing is, step #4 isn’t so straight forward.  To make sense of it, we can retake a look at the toe-stubbing example mentioned in the previous post: your brain will process stubbing your toe on your living room coffee table differently than stubbing your toe while lifting a burning car off a baby.

This is because your brain will weigh out a huge variety of factors into the decision to actually feel pain, despite what may or may not be happening at the tissue level.  The brain’s main goal is to keep you safe and protect you from harm, and it will handle all the impulses for the neurons with that in mind (ha! no pun intended).

In this example, the coffee table that you’ve stubbed your toe on is the biggest threat.  You’ve hurt your toe and you should probably make sure that it’s ok. Additionally, your brain wants to protect you from making that mistake again so the pain becomes a motivator to move that table to a different location or to maybe turn the lights on when you’re walking around at night.  In short, it allows you to feel pain so that you can take care of your toe and ensure that you take steps to keep this problem from happening again.

In the burning-car-on-baby part of the example, however, stubbing your toe is the least of your problems.  Your brain realizes that you need to get that baby out before the car explodes and makes the executive decision to ignore your toe at the moment.  Undoubtedly, you’ve heard examples of heroic feats from people who have sustained severe injuries and didn’t even realize it at the time. That all probably makes intuitive sense.  But let’s make some other changes to this toe-stubbing incident.  Let’s say you’re on a date with someone you think it just the bees knees and you stub your toe on your living room coffee table.  Despite the lack of other life-threatening events, your brain might prioritize mate-finding over the well-being of your toe, if that’s what it thinks is more important for you over all…and you might not experience the same type of intense pain as you might otherwise have felt.  In a basic sense, context and priorities can trump actual events.

Through this example, I hope it’s evident that the messages that get to the brain don’t actually have meaning until your brain mulls it over and processes them appropriately.

But how does all this happen? The Brain Can Quiet Messages

As we saw in our example, the brain has amazing capabilities to “quiet” neurons and to keep them from giving the “pain” signal to our hurt tissues.  It does this through extraordinary mechanisms that include molecules you’ve probably heard mention of: endogenous (meaning: made in the body) opiods (we manufacture similar compounds in pain-killing drugs called narcotics), serotonin (the “happy” hormone), and endorphins/enkephalins.

These compounds all function to decrease the “excitability” of the neurons that are present in the tissues.  They can keep the messengers that these neurons make from activating the receptors on the neighboring neurons and passing the signal along.

(Details on how a whole-food based, gut-heath focused, and stress-managed lifestyle can help optimize the function of these compounds will the topic of later posts.) The Brain Can Amplify Messages

Conversely, the brain has the ability to transmit and amplify pain messages if it feels that the tissues aren’t safe.  This capability plays a huge part in chronic pain and is the bulk of what we’ll be discussing in posts down the road.

Many, many compounds and circumstances (especially in modern society) can ramp up the brains desire to protect the tissues (aka: to cause pain).  Compounds like norepinephrine, cortisol, adrenaline, and the sex hormones in the blood can all set up an environment that the brain perceives as unsafe because of their action on the neurons.  The sympathetic, endocrine, and immune systems (through the activation of pro-inflammatory molecules called cytokines) can all additionally play a role.  In short, their goal is to sensitize the neurons so that the brain can protect the body and keep it from doing the things that will cause further harm.

While these systems were evolutionarily advantageous, our current lifestyles can often breakdown the sensitive feedback and signaling loops that keep these systems in check…and their malfunction can actually be the cause of health problems that lead to pain.

Again, the details of these intricate interactions will be the highlight of other discussions but if you’re interested in the meantime, I think this 3-episode series on the hippocampus-pituitary-adrenal axis by Diane Sanfilippo is a fantastic primer with many great practical takeaways.

All these systems can seem incredibly complex–and they are–but I also hope it’s evident that the basic principle of homeostastis (balance between all the moving parts) is the thing that really ties these topics together.  The body is constantly attempting to balance the push and pull of these systems…and it’s in our best interest to help allow it to do what it does best.

Next, we’ll delve further into how our hormonal and molecular milieu can change our neurons. And why that’s so important. Have questions about anything I’ve written? Leave me a comment in the section below or head on over to the Submit A Question form!