How to Avoid (and Potentially Cure!) a Hangover Naturally 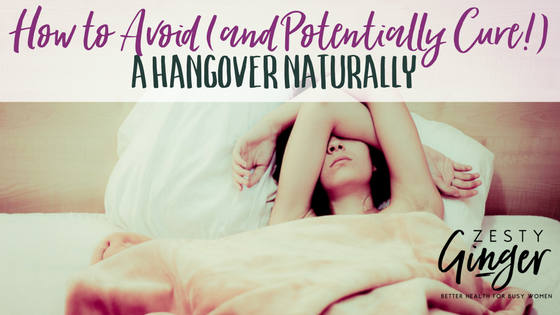 It’s the holidays and there’s nothing like going out for dinner and dancing with great friends or throwing down at a festive get-together. In a much less fun way, there’s nothing like realizing you’re going to wake up with a raging hangover…and coming to terms that you’re not able to bounce back from alcohol the way you used to in college.

As usual, let’s start with a disclaimer:

There’s nothing healthy about binge drinking.  While there’s some literature that low to moderate alcohol use can be beneficial for a long and healthy lifestyle, there’s some amount of evidence that a lot of those benefits potentially come from the fact that moderate alcohol use happens in settings where people are connecting emotionally and bonding with the people around them.

That being said, NONE of this applies to binge drinking so this post is in no way a substitute for common sense or should make you feel good about drinking yourself into a stupor.  (Not to sound like your mother but please be safe!)

However, I’ve talked before about the importance of community and relationships when it comes to our health a lot and truly believe that some time goofing off with the people we love can be incredibly beneficial. If that’s involves alcohol, so be it (or sweets or whatever you feel like treating yourself with).  And if it just so happens that all that fun lead to a little hangover, this post is here to help. Even though I end up talking about it pretty often, I feel like not enough people have heard of this magical little herb for how incredibly effective it is. The active compounds in the milk thistle help to up regulate enzymes in your liver so that you can more effectively breakdown alcohol and it’s hangover-causing-by products. (Read more about milk thistle and how it functions in detoxification pathways in this post right here.)

Tincture because I can put it in some water and get the benefits of both…but I do think the capsules work just as well (they work a little bit slower because the digestive tract has to do more to them before they are able to be absorbed). I use 2-3 dropper-fulls at each dose. (If I took the capsules, I would take 2-3.) The tincture tastes awful but I put it in 2-4 oz of warm water and take it like a big shot.

That’s it! It’s pretty easy, you just have to remember so I stick mine on the counter top before I head out.

If I know I’ll be going out, I’ll try to start a crock pot full of bone broth the day before. I keep big cuts of beef femur bones in our freezer that I reuse until they start to crumble–that’s how I always know I have some to start bone broth whenever I want.

I just stick the bones, a whole onion with the skin on, 1 tbsp Redmond Real Salt (or any other salt with trace minerals), and 2 tbsp of apple cider vinegar to help the minerals leech out of the bones into the crock pot and fill the thing up with cold water. Then I let it simmer for 24-48 hours (but check out the full recipe in the link above)

1. Have a cup before you head to bed.
2. Have a cup (or 5, depending on headache severity) when you wake up and throughout the day.

If you tend to get queasy after a night of drinking, stick a bottle of peppermint EO next to your bed. The smell of peppermint is pretty darn effective at helping with nausea.

1. At the first sign of nausea, take an old towel and place 5-8 drops of peppermint on the towel. Stick the towel on your pillow while you rest up.
2. If you’re motivated enough, mix a few drops of the EO with a teaspoon of lotion or another oil (coconut, almond oil, etc) and rub onto your temples, wrists, feet, and/or behind the knees.

Gelatin is so nourishing for the gut and helps to coat the intestines, keeping irritants from furthering the chemical/mechanical damage a night of drinking can cause.

It won’t necessarily make you less nauseated because it usually is primarily caused by the effects of dehydration around the brain but it can help your stomach feel stronger and less prone to upset when you’re attempting to stomach (no pun intended) the other remedies I’ve outlined above.

1. Take 1-2 capsules in the morning after. I usually take it after I’ve taken the milk thistle but you can really take it whenever.

Sometimes you just have to bring out the big guns for really awful hangovers. A lot of times, the remedies I said above will at least help decrease the amount of ibuprofen I have to take which is nice given how harsh NSAIDS can be on an already irritated stomach. Watch this video about how to NSAIDs damage the gut and what you can do to help minimize damage. (But if you know you have bleeding problems, kidney problems, and gastritis, I would avoid NSAIDs entirely.)

#6. Learn from Your Mistakes

It would be kind of annoying in this section if I just said “just don’t drink”…because–obviously–it’s no reasonable persons’ goal to get a hangover and it usually happens when you’re just not paying attention.

That being said, it’s important to look back and consider what happened in the situation that lead to you drinking too much and then make changes according for the next social situation.

And with that, I’m heading back to the couch to rest and relax 🙂 I think I’ll take a cup of bone broth with me…