Melatonin, Cortisol Release, and Why You Should Go To Bed Earlier 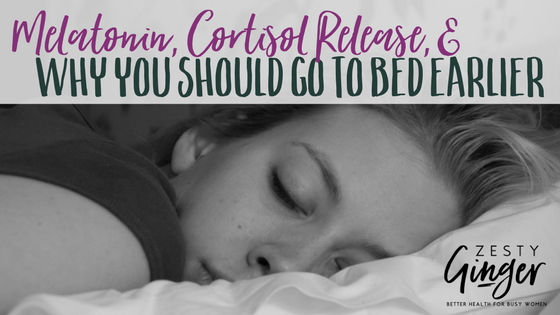 However, an estimated 50-70 million Americans have chronic sleep deprivation…and the number is most likely underreported.  Between busy work schedules, constant exposure to electronics (that next best Pinterest image is always waiting to be found, right??), needy family members (especially of the tiny variety), and organ system dysfunction that leads to sleep disorders, there are quite a few things that keep us out of bed.

But let’s for a moment assume that we understand that we should be getting roughly 7-9 hours of sleep each night.

In this post, I’m going to make an argument that  physiologically speaking, the timing of sleep really does matter. And given the choice, why I’d rather have 6 well-timed hours of sleep than 10 poorly timed ones.

Note: sleep is very complicated so what I’ve outlined below is just the tip of the iceberg. The information you’ll find here is the information that applies to the largest percentage of people…but it won’t apply to everyone. As most of you have probably heard, cortisol is a natural compound secreted by the adrenal glands that is critical for being a regular human being. While it gets a bad rep by often being called the “stress hormone”, the reality is that cortisol production in a regular pattern is what allows you to get up out of bed each morning, go to work, and feel energized throughout the day.

Logically then, it makes sense that cortisol production ramps up in the earlier hours of the morning and slows down towards the end of our day. (See graphic below this paragraph for a visual representation of this phenomenon.) Another way to say this is that cortisol is a big part of our regular circadian rhythm. Before we go on then, let’s talk about the circadian rhythm.

We mostly think about our circadian rhythm when we travel because that is when we so intensely feel the powerful effects of breaking into your body’s natural flow. If you’ve ever been really jet lagged, you can testify to the fact that the push and pull of our sleep-wake cycles is truly a force to be reckoned with.

What we tend not to think about is just how much this circadian rhythm normally plays a role in our lives. This is because we tend to believe that we’ve taken ourselves out of the natural environment so much that it no longer applies to us. We can wear sleep masks, turns on artificial lights at all hours of the night, and drink coffee whenever we feel tired. And to an extent, these things can work…if you’re a late shift worker who has really devoted yourself to optimizing your sleep environment, you probably have shifted your circadian rhythm a good amount!

Have established that, let’s throw melatonin into the mix.

Melatonin a pro-sleep hormone created by the pineal gland (it’s inside your head). Again, it’s a hormone that’s integral to the maintenance of the circadian rhythm by making you sleepy as the sun is going down and getting broken down as the morning rays hit your corneas (one of the coolest tricks in the body, in my opinion…but it’ll get slowly broken down even without the sun).

For this reason, you can imagine that lots of things in our environment can mess with our natural melatonin production.  I’m talking about things like artificial blue light (from TVs, computers, and phones), caffeine intake late in the day, and even just getting stressed out.

Despite these hinderences, make to mistake: melatonin is still being made to make sure you are getting pushed to stay in your predetermined circadian rhythm.

Check out the graphic below to see how melatonin starts to rise in the later evening and quickly wears off by about 7 am for a lot of folks. Now that we’ve seen and discussed  melatonin and cortisol production separately, let’s look at them together…and what conclusions we can make from this knowledge.

Melatonin and Cortisol Curves Together

When looking to optimize sleep, it makes sense to choose a sleep schedule that most closely correlates with our natural circadian rhythms as outlined by melatonin and cortisol ebbs and flows.

As you can see in the graphic below, there’s a very appreciable and handy spike in melatonin right when cortisol production is lowest in the body. Likewise, melatonin plummets and cortisol peaks nearly simulteaously. Logically, these times correlate to when you’d want to go to bed and wake up to get the most out of your sleep and help you get the biggest pep in your step in the morning. In the following graph, you can see that the most beneficial time to get into bed would be around 9-10 pm (yes, I’m aware that this seems ridiculously early for a lot of you) and the “best” time to get up would be between 6-7 am. (This is just physiologically speaking, I’m not making any judgement statements here which is why I put best in quotation marks.)

Here’s the graphical representation of the interaction between melatonin and cortisol. I’ve outlined the optimum balance fog sleep between the two with the dashed lines: Now, I am completely aware that it’s not always, or even often, possible to stick to a schedule like this. I usually have to get up to go to work at around 4 so I am often aiming to be in bed by 8:30. (It’s really sad in the summer when the sun is still up and the neighborhood kids aren’t even in bed yet!)

So my point isn’t that everyone has to sleep between 10 pm to 6 am or we’re all just going to be zombies. My point is that as much as is possible, it behooves us to try to work with our natural physiology rather than against it. Perhaps this means that you go to bed earlier but wake up earlier to work out/get things done/whatever. Maybe this means that you ask a family member for help with the kids so that you can get more done earlier in the evening so that you’re not staying up so late after they’ve gone to bed.

As with everything, to not so much about the absolute as just trying to do your best with every day. The changes you make might be really small but I can assure you, your body is definitely noticing!

Adrenal and hormonal imbalances can be a HUGE cause of poor sleep and, sadly, these are often the people who need good sleep the most! If you’ve been struggling with this and want help, Megan and I are kicking off our Healthy Hormones Group Program on kicks off twice a year (spring and fall!).

It’s a 3 month group program complete with hormonal, adrenal, and neurotransmitter testing, a customized protocol created just for you based off your lab results, bi weekly videos, instructional emails, group calls, and a private FaceBook group.  It’s filling up fast so make sure to get in touch with me if you’re interested in joining us!!