How to Minimize Damage from Antibiotics When You Need Them 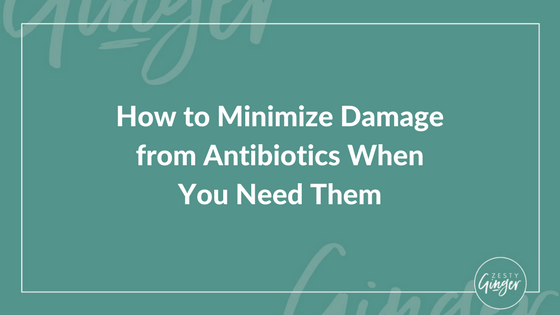 This is a topic that we get asked about all the time!

Since most of our community is more on the crunchy side, it can be really hard to know how to combine the best of both conventional medicine and functional medicine into your life.

That’s because it’s really easy to get down on conventional medicine. Our system is broken, doctors aren’t allowed the time to spend with their patients, and there’s a lot of medications thrown out to cover up symptoms instead of treating the underlying conditions.

That being said, I’m a believer in the benefit of having ALL SORTS of tools at your disposal.  That allows people the freedom to find whatever works best for them, without limiting themselves to just a handful of interventions. 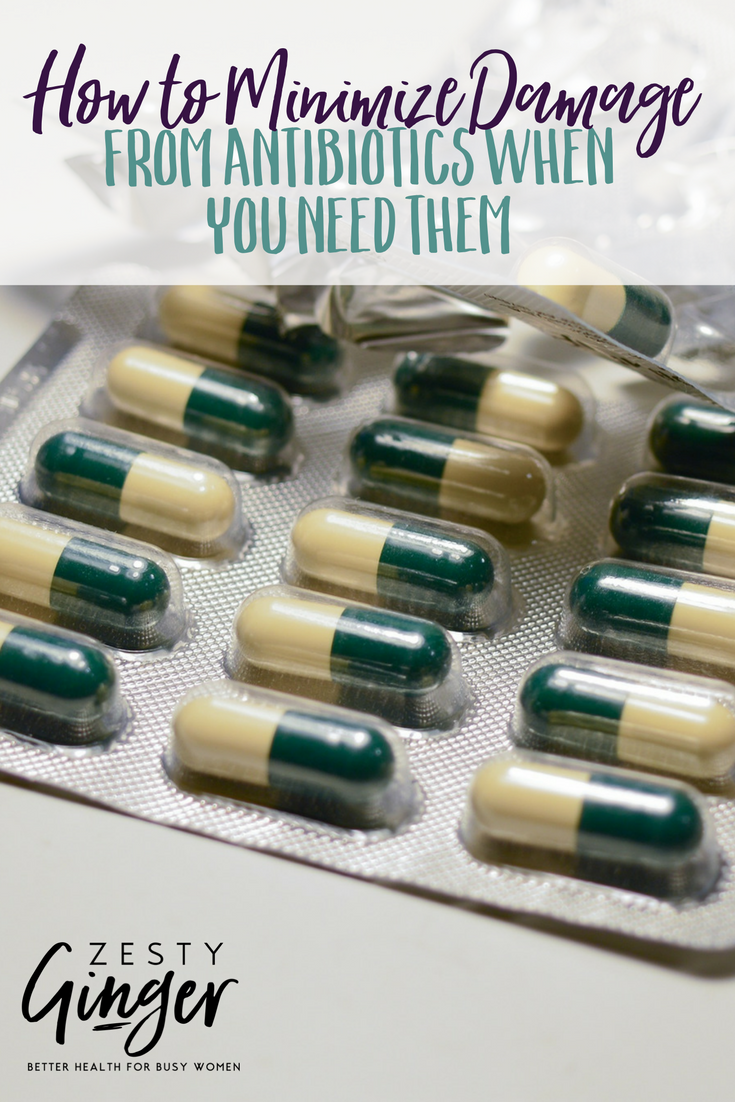 This is especially relevant when we see people adamantly avoiding antibiotics, even when they have a very clear indication to take them.

It’s a post about how to limit your gut damage when you find yourself needing to take them!

The video below is an old periscope I did a while back.  It looks a little goofy since the video didn’t capture the comments…but there’s still some great stuff in there!

Watch below to learn:

Taking antibiotics can predispose you to gut problems especially if you have autoimmune issues or gut damage. We have come up with a protocol to help with gut distress during and after a course of antibiotics.

While antibiotics have their drawbacks, there are benefits to western medicine and times when they are necessary.  Alex has talked about the need to understand when antibiotics are necessary vs. when you can use natural antibiotic remedies. For instance, strep throat left untreated in some people can lead to neurological problems or heart problems. Even a simple nail infection could lead to very severe consequences such as the loss of a limb based on how your individual immune system reacts to the infection.

There is a new trend in the wellness community where people don’t want to take antibiotics for any reason. As a community we need to look at how we react to the personal choice of using antibiotics and not judge others or ourselves if we use western medicine. We shouldn’t  feel like we are not “Paleo-ing” hard enough or we’ve failed when we need to use antibiotics.

That being said, it’s important to have a plan in place to mitigate the damage to our bodies when we do need to take antibiotics.

Antibiotics kill off a substantial amount of gut bacteria, both bad bacteria but also good bacteria.  Once the antibiotics enter our stomach, they start killing off good bacteria which give the opportunity for small colonies of active bad bacteria to get out of control.

The following are keys to protecting the good bacteria in your gut during/after antibiotic and will go into detail on each one below:

It’s important to time the use of probiotics while taking antibiotics because the antibiotic will kill off some of the probiotics. Antibiotics transiently kill off bacteria for a period of time after you take each pill, so taking probiotics between antibiotic doses will protect your gut from being over populated with bad bacteria in the meantime.

For example: if you take your antibiotic twice a day, then you would want to take your probiotic in between the times you take the antibiotic so that they hit your stomach when the antibiotics are least active locally in the gut.

1). Megasporebiotic, which is a soil based probiotic –  It is a practitioner only line, meaning you need to purchase them through a licensed practitioner(Zesty Ginger).

2). VSL #3 – Ideally, you want to take your probiotic three times a day during antibiotic use. You could use the Megaspore or VSL first thing in the morning and before bed and then use a less expensive brand such as “Garden of Life” closer to the time of antibiotic use.

Adding in fermented foods to your diet each day is very important. Fermented foods raise the quantity of good bacteria in the gut in a sustained way, over a longer period of time. These foods include both prebiotics and probiotics. Focus on eating fermented foods with every meal. However, if you know you have SIBO or Candida be careful with these foods because they can cause increased problems.

Some great options for fermented foods are (ideally homemade or quality store-bought):

Other food sources for prebiotics include green leafy vegetables. Some probiotic brands include prebiotics, or you can supplement prebiotic fiber with Potato Starch. Start with ⅛ tsp. in water and build up to tolerance over several weeks. As with probiotics, if you use too much too soon you can shock your system and have major gastrointestinal upset!

Saccharomyces Boulardii is a yeast that promotes good bacteria by taking over space in the gut that bad bacteria would otherwise occupy. In essence it “crowds out” the bad bacteria. This is very beneficial type of yeast for the gut. It does NOT cause yeast infections and it can help prevent SIBO from occurring after antibiotic use. It is also good for occasional diarrhea or constipation, and can be taken daily for gut healing protocols. During antibiotic use ideally take 1-2 caps, once or twice a day.

After you are done with your course of antibiotics we recommend staying on the above regime for 3 months to restore your gut health.

We hope you found this teaching helpful!