Part 6: My First Entry Into Neurofeedback and Forgiveness 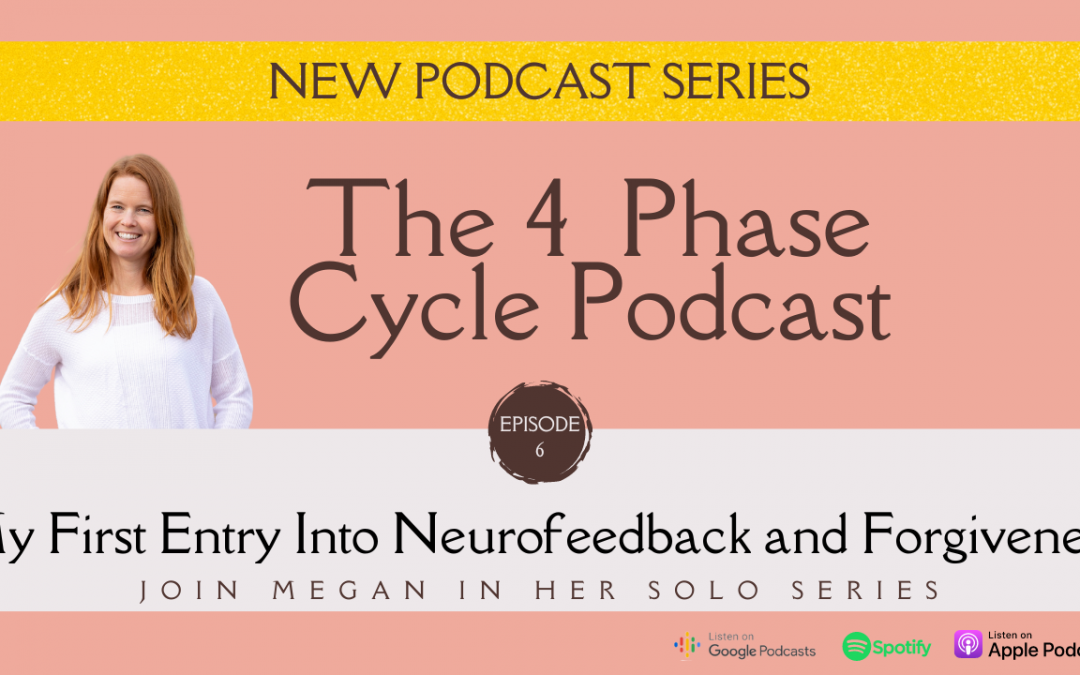 In this solo podcast episode, Megan talks deeply about forgiveness. She also shares about how not forgiving someone or even yourself, triggers certain things that would happen and old feelings would come up and would make you feel out of control and there’s just no stopping it. In this episode, Megan also talks about how she knew there was something really deep in the subconscious mind that would be so powerful to get through so that you could be on the other side of this, not just consciously, but also unconsciously. She also explains in this podcast the difference between being in the alpha state and the beta state.

It was like, silence. Total silence. And mind you, remember that the storm and the sound was actually alpha. So the less sound there was, the less alpha there was, there was nothing. And I’m like, Oh, interesting. And I love my kids. And I really do love my kids. And I’m like, this isn’t good. I know. I’m grateful for my kids, right? So I’m thinking like, what the heck? And this is when I realized that this was missing. So often, I would do the gratitude, journaling, right? Writing all the things down or like a statement before bed or just saying these affirmations. And at the same time, I was treating them like a to do list and this was the same thing that was happening right now. When it was like a to do list of this is a conscious thing I should be thinking, the feedback was clear. So what happened was, I realized, and I wasn’t actually feeling it, this was my first cue into the fact that I’m not actually feeling it. This isn’t an intellectual activity. So instead, the next time I went in and I was like, Okay, I’m gonna get really specific, and think of an amazing time with my daughter and something just really, really powerful a very specific image of her at the home at the homebirth I have and the part of it that was really powerful and pleasant and it was total alpha, just total flooding, I needed to get so specific so that I could feel it. It wasn’t just the checklist items. So this was a huge understanding for me. And in the process during this week, we did a lot of different things to help to work on forgiveness. So I like the analogy. And the analogy that was told to us at the time is, you think of like an iPhone, right, or whatever phone you have, and you have all these apps and or your computer, you have all these things open. And even though you’re not using them, they’re just opening, they’re running in the background, and they’re using up your battery, they’re using up your space, they’re your precious space. And so you know, often we go ahead and just like closed down everything and and you notice like, oh, it’s running so much better. And that’s what we were doing there is working through any old resentments or fears or things we wanted to forgive so that they are not running in the background and using up energy. During the process, I went deeply into working on forgiving my husband. And to the point where on the very last day, we did a process I said, Where would you like to test this because I was like, did that you fully forgave. And I was like, Yeah, I’d like to test it. So we had a heart rate monitor on and in the process of testing, we could actually see if your body was having a physiological response to a certain thing. So they created, I told them the scenario that they would feed back to me, and then test to see if my body reacted a very specific image that used to send my cortisol through the roof, I would feel it. And I was able to keep my heart rate totally steady. There was no shifts. I was like, Oh my gosh, this is so so so so cool. And I go home from this trip, like all excited, right? And this was another takeaway I’ve had is that I get home and I say to my husband, I’m like, Oh my gosh, like Nate, like I forgive you, like deep in my body like we are good. And then I realized that he hadn’t been at this event with me, he hadn’t been doing this specific work all week, he had been doing the regular thing at home with the kids. And he was not where. I was, he was not on the same page. And he said, great, I’m so glad that you have and I have not dropped the guilt.

I’d love to have like, yeah, it’s there and I’m gonna slowly slowly move into a different location. Right? So it’s just yeah, I still not ignoring the science and being in a place where I wouldn’t didn’t have and don’t have and I don’t have any more of that like immediate fight or flight. Right? It’s my body is resilient is my current belief. I can handle small things. I can handle that load, I will be okay. Which was another pattern is that at the time because I believed that my body wasn’t quite as resilient and that I needed all these things. I did believe I needed a very certain amount of sleep and a very certain amount of filtered water and supplements and all the things I had really created this ritual around all the things. So on the last night of the second training, I had the opportunity to hang out with all these amazing humans that I had been with. There were five of us going through each week. And this amazing cool mansion and going into the pods, and then we debrief and have sessions with the practitioners there to really sort through what you had learned and takeaways. And I had the opportunity to hang out with with all of them. And I had a flight at 4am the next morning. So for me, this was unheard of to stay up late when I know I have to get up early, because that didn’t fit my model of the person who needs needs all the sleep and needs things to be a certain way. And what I realized that I was really craving beyond those other needs was connection. And I had an opportunity for connection. And I said, you know what, that’s so clear to me right now, after all the reprogramming have done this week, I’ve so clear to me that connection is my top priority. So I did I stayed, I hung up very, very late, I still had to get up at 4am. And you know what, I was tired. And it was okay. I took an Uber, late at night. And I was tired on the flight home. But it was totally, totally worth it. And the cool thing was, so during the week, there were different times where you would have a certain sign. When you were doing the process, you’d say, Okay, if this is if this is it, and this is if this is the lesson I meant to learn, show me the sign. And mine was I would look up the sky. And if I saw Orion constellations are a big thing for me, my grandmother always took me out to look at all the constellations. And if I saw constant constellation, if I saw Orion, then I would know that that was my sign that that was the message. And so I’m walking out. And last night, I had just had this amazing connection with humans, I just had the realization that like I am resilient. And it is okay if I don’t get all the sleep tonight. And it is okay if I don’t take every supplement, right? I am resilient, and my body is. And I look up at the sky as I’m walking out. And we’re out in the middle of nowhere. So the sky was bright, like all the stars were shining and right there was Orion. And I just burst into tears like it was so so so clear, the messages and that for me to step out into that beautiful sky and look up and see that, it just confirmed that all the things that I had done that week are just completely gelling together and I had a new understanding of the power and resilience of my body and of the importance of connection. So that was where I got my next set of lessons, right? It just keeps going. And in the next podcast, I’m going to share the next part of the puzzle. But see, here I am, I’m like slowly bringing together the different pieces. Each event I would go to. And often it’s not really the event itself, so much as the setup of the event. So other things, you know, like, for example, the fact that I had the opportunity stay out late that wasn’t, that wasn’t exactly a part of like something I was learning during the time. It was just that now there’s an opportunity. So life gives you, you know, opportunities to see what your normal reaction was. And I was able to see my beliefs around my body and what it needed. And that is where I would get most of the lessons is more around the interactions with other humans.

And then the setup, the sleep, the food, the things that are easily triggering to us. So it was so so, so, so powerful. And I don’t necessarily think that you need Neurofeedback or some crazy electrodes on your head to have these kind of realizations. So I thought just sharing the story here hopefully, there’s something that you connect to. Hopefully you can see a little bit of you as I go through the journey and hopefully you’ll see kind of the pieces coming together. The realizations that kept bringing me closer and closer to who I really was and then closer and closer to my husband as I dug deep and so did he. Okay, I hope you enjoyed this if you have anything you’d love to share or any questions please feel free to always email support@zestyginger.com. If you can share this with a friend if you know somebody who would really benefit from what I shared today, please please please send them a text right now, post it on your Instagram, on your story. Anywhere a review all these things help us a ton are so happy to have you here and I will catch you on the next part of my story.