Natural Remedies for The Flu 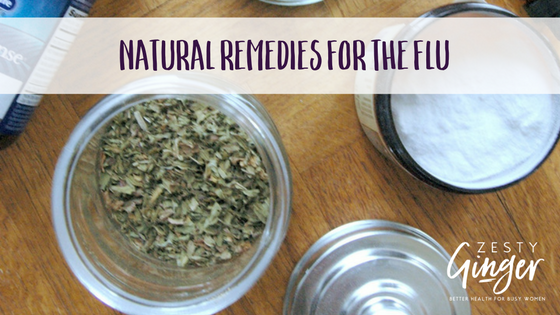 Getting the flu is the worst.  It really is.  And I’m writing this post because I’ve been there recently and managed to get out on the other side pretty quickly.  I give all the credit to some terrific natural remedies I had found and researched and I’m here to say that they work for me pretty darn well!

This one is a biggie.  You can put all of them together for a pretty yummy hot drink like I did or you can make them individually.

Nettle is amazingly healing for the respiratory tract.  It has been used to decades (and centuries!) to decrease symptoms of viral upper respiratory illnesses like cough, mucus production, and sore throat.  It’s also used in asthmatics and people with allergies to alleviate breathing difficulties and you can reap the same benefits during the flu.

Peppermint tea is one of all-time favorites because it does so many things.  During the flu though, drinking it can help dislodge mucus (eww) in the airways and calm an unsettled flu-stomach.  When I can’t possibly drink any more fluids, I make a gigantic steaming cup and put my face over it and breath in the steam.  It always seems to clear up my sinuses a little and relieve chest pressure.

Raspberry Leaf is the member of the trio that provides some serious nutritional benefits at a time you may not be able to eat a lot: vitamins A, B1, B3, C, as well as minerals like calcium, iron, potassium, manganese, and phosphorus.  As a bonus, it’s pretty delicious with that peppermint tea above!

2.  Keep up with your probiotics

Although it’s counter-intuitive to fight viruses with bacteria, the body is a lot like Hollywood…more good guys showing up at a fight as backup is always a good thing! The bacteria in our guts do more than just help us process and get nutrients out of the food we eat, they help our body with signaling and processing that get our immune system geared up and ready to fight intruders.  They can also help make it harder for bacteria to supra-infect (those sneaky son-of-a-guns!) your already vulnerable airways. It may be harder during the flu but keep up with whatever you’re already doing to get probiotics.  I tried to keep up with my homemade goats milk yogurt/homemade coconut milk kefir and homemade sauerkraut but when the nausea was food-prohibitive, I took a couple doses of probiotics instead (saccharomyces boulardii and a broad-spectrum).

If the flu leaves you with the unfortunate fate of seeing your food return in the wrong direction, it’s safe to assume your gut needs a little love.  L-glutamine is an amino acid that is very soothing and healing for the gastrointestinal tract and it works even better when added to a diet that already has other gut-health-promoting amino acids (I’m looking at your bone broth!).  I take 1 g 2-3 times per day when I’m sick.  Contrary to other supplements, you take this one in between meals.

I alternate adding one of these at a time to any other tea I’m drinking (usually peppermint).  They both work pretty similarly: they contain mucilage which is exactly what is sounds like (even though more mucus seems like the worst, right about now).  You’ll see when you brew them…they release this slippery compound when steeped for a few minutes that is SO great at dealing with sore throats and difficulties swallowing.

Where would any Primal/Paleo blog post be without at least a nod to this nutritional powerhouse? It’s got minerals (magnesium , calcium, phosphorus, silicon, sulphur…all in an easily assimilated form!) and healing amino acids (glycine, proline).  Plus it’s delicious, warm (perfect for sore throats!), and satiating when you can’t keep down much else.  Here is my never-ending bone broth recipe that I always make when anyone in the house is sick.

I know it’s bad form to include a “don’t” in an action list but I think this guy pretty much has to come after the bone broth suggestion.  During the flu, your body is essentially in defense mode and it needs sustenance to help it do it’s job.  What it doesn’t need is a bunch of crap that it has to manage and get inflamed over.  So put the processed foods and sugar away and stick to stuff that gives your body what it needs.  If you’re finding that it’s hard to eat your usual meat and veggies, try easily absorb-able but healthy foods like sweet potatoes, goats milk yogurt, etc.

There’s a caveat here.  This past flu round, I was so nauseated that I ended up eating some gluten free cereal made up of only 2 ingredients (non-GMO corn flour/meal sweetened with pear juice).  It’s not ideal but when things get really bad, it’s not the time for being a hero…just make sure it has minimal ingredients and nothing that’ll put your body into overdrive to get over.

Second caveat: sometimes (usually) people don’t have much of an appetite when they’re sick and that’s actually ok.  Especially if you’ve been eating healthy before you got sick, you have plenty of stores to keep you going until you feel a little better.  If food doesn’t sound good to you or you can only eat one thing (see cereal above for me!), I say go with whatever you’re feeling.

This one is pretty obvious but because it’s been said so many times, people have started to ignore it…but you shouldn’t! I get ascorbic acid in powder form and add it to my teas or in water along with magnesium powder.  It’s a water soluble vitamin so there’s not much of an upper limit to how much you can take but I usually take 2-4 doses per day (a dose of the stuff I bought from Whole Foods is 1/4 teaspoon).

You know I walk the line between lovable-crunchy-gal and crazy-in-the-woods-catching-fish-bare-handed-lady but I still think there’s a time and place for proper use of modern western medicine. It may not be the best at improving quality of life but we have gotten the life-saving/life-supporting stuff down pretty well.  If you really need help, get some.  A tamiflu shot or even some numbing throat spray when the going really gets tough isn’t going to un-do all of your good earth-loving, naturally-focused efforts you do the other 3 years when you’re not sick.  That’s just my opinion. (But this is my blog, so that’s ok!)

If you’re reading this while sick, I wish you the speediest of recoveries!  If you’re not sick, I suggest stocking up for when this sucker strikes.