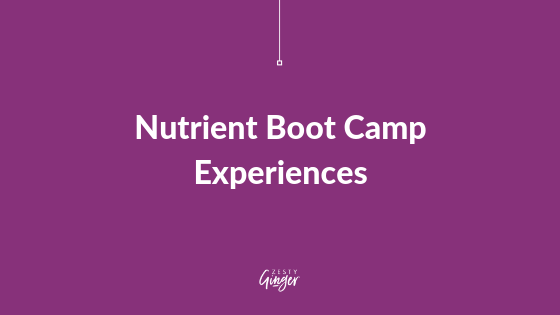 And How Focusing on Nutrient Density Changed My Health

Nutrient Boot Camp has been a work in progress for the last 6 months or so for me.  But even though I feel like I know it like the back of my hand and can talk about it in my sleep, I realize that this is still a very new program and that a lot of you might be wanting to learn more about all the benefits I believe can be gained from participating in it.

I’m going to start off with my side of the story.  But I’ve also been having people go through the challenge over the past several months and I’ve asked a few of them to briefly share their experiences and insights as well with all of you.

I’ll start with me! (This is the clearly the condensed version of the story.  It hasn’t even gone this linearly…but this isn’t my biography.)

I went paleo a couple years ago after hearing these amazing anecdotes online.  “All my problems went away!” “I look like Angelina Jolie now!”  Now, I didn’t actually think this would happen to me…but I guess a part of me was wishing it would.

I had struggled with chronic pain, digestive issues, and hormonal imbalances for years previously so it’s no real surprise that everything didn’t magically go away with starting a paleo diet.  A lot of things DID improve.  My digestion got much better, my chronic pain become more tolerable, and I felt like I had more energy than I had had in a long time.

But what I love about paleo is that it’s a lifestyle.  So shortly after my food changed, so did a lot of other things.  I did a major overhaul of my medication and supplements based on the best of both conventional and functional medicine, embraced natural products to cut down on chemical exposure, and put in considerable effort into my stress levels and attitude on life.

Again, I made some big improvements, especially with my hormones (which was an area that had failed to respond very much previously).  I was also super stoked to find that I didn’t have to CONSTANTLY think about my digestion and what I had to do to make it work somewhat normally.  That hadn’t happened since college…so needless to say, I was very grateful.

So, of course, that’s not the end of the story.  I was feeling pretty good about the changes that were happening but I was still stumped as to why I would every so often backslide into problems I thought were resolving. (If you have chronic problems, you know how infuriating and bewildering this can be.)  I’d be going along ok and then BAM! Back to what felt like square one.

After a lot of soul searching and frustrating moments (this is where the story is abbreviated, but I don’t want you to walk away with the idea that this part was easy), I realized that one idea kept coming up over and over again…and that idea was the concept of nutrient density and diversity.

I had taken away a lot of the processed and sugar-laden foods and had even replaced those items with some really healthful stuff (like bone broth, sardines, and ghee) but when I was really, really brutally honest with myself, I still found myself eating lots of grass fed hot dogs, sweet potatoes, and the same 5 vegetables over and over again.

And I knew that while that was fine at the time, I’d have to make a bigger commitment to my health and change more of my approach to food than that to truly make a bigger difference in how I felt.  It had taken me close to 8 or years to get down to this point and I deep down, I knew that it would take a lot of effort (and time) to get me out.

From that concept, Nutrient Boot Camp was born.

I first made the program just for myself.  The original name was actually “30 Plants for 30 Days” which I then ran with a test group. The result was that most people found it too difficult to stick to and I ended up reworking the program to be a bit more realistic. (That’s why there are currently 3 levels to the program and I’m thinking of adding a fourth.)

What happened over those months for me, however, was absolutely amazing.

I was feeling fantastic.

My digestion was rock solid, my hormonal problems kept steadily improving (later on, I started focusing on detoxing as well and that’s where the magic happened…but more on this later), and I was actually getting out of bed with energy to spare.  I found my mood improved as well and got closer to the happy-go-lucky kid I had been growing up.

Conceptually, it’s not that surprising since nutrients power nearly every chemical reaction in the body.  The fact that I was providing myself a steady stream of high quality, diverse nutrients just made everything work that much better!

This idea, I figured, was something I had to get out into the world more. And that’s when I made Nutrient Boot Camp available to everyone.

Want to check it out for yourself? Click here to sign up to be part of the July Group.

One of my favorite parts of doing Nutrient Boot Camp (and for me, several times now), is that it has completely changed how I look at food…and that has made my daily decisions so much easier.

I’m not alone, check out what my friend Brittany (and my co-host on the new Wellness Beets podcast!) had to say:

So cool to hear, right?

But it’s also been really rewarding to hear how other people have changed their health by doing the challenge.

Stephanie and I had been casually friends through our blogs and Instagram for a while before Nutrient Boot Camp.  But it wasn’t until she did the challenge with me when we got to know each other much better.

Like me, Stephanie had been struggling with both energy and digestion and it was so amazing and rewarding to see her improve with those things.  As many of you can relate, when you’re a hard time with chronic health issues, seeing improvements like this can be incredibly uplifting!

Here’s what Stephanie had to say:

I’m in the process of gathering even more stories to share with everyone because I think it’s so amazing and uplifting to be able to see how people’s lives improve when they start fueling their bodies better! And with this, I’m hoping the word will start to spread about this concept that I feel so very strongly about.

Have any questions about Nutrient Boot Camp? I’ve written a FAQ post to cover a lot of the common things I get asked.  If you have any others, you can always contact me or get in touch on social media (I’m on Instagram, Pinterest, and Facebook).