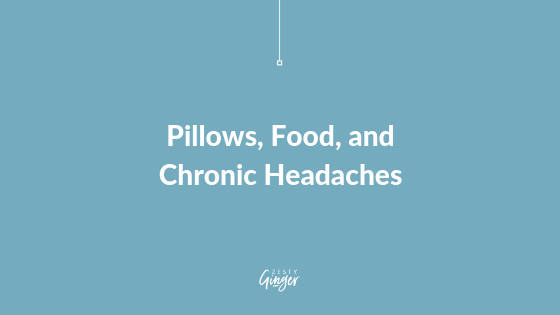 Why I Threw Out My Junk Food and Pillows

(Ok, so I didn’t actually throw away my pillows. That would be wasteful. But I reserve them for guests.)

I started having chronic headaches at around 13 years old. They weren’t terrible, like migraines, but they were bad enough that by the end of high school and through most of college, I was taking 800 mg of ibuprofen four to five times per week.

There are so many things wrong with that statement that it makes me cringe just to type it out.

First of all, NSAIDS can contribute–and most of the time do contribute–to gut permeability. (Find out how that happens and what you can do about it in this article called Are NSAIDs Bad?)  So given that I already had major gut problems from eating a poor, allergen-packed diet, I’m sure I was just making the problems way worse.  Compounds crossing the gut barrier that shouldn’t ever get into the blood stream generally leads to systemic inflammation…and headaches can be a manifesting symptom of that global process.

Secondly, I should have been more focused on treating the underlying cause than just masking the symptoms for upwards of 8 years.  I had gone to a few chiropractors throughout the years but it’s mildly ridiculous that I thought one session per week would fix all the other issues going on.

The problem, in my opinion, stemmed from two major problems.

The first problem was my continued consumption of crummy foods, especially since I wasn’t aware of my severe allergy to gluten, wheat germ agglutinin, etc containing grains. This meant that I had poor gut flora, uncontrolled gut permeability, and immune system activation which lead to systemic symptoms like fatigue and, more relevant to this discussion, chronic headaches. Starting a whole food approach kicked off by a good elimination diet and focusing on gut healing lead to a rapid and profound decrease in the frequency of my headaches.

But just changing my diet didn’t take care of all the headaches.

Because I hadn’t addressed the functional/alignment aspect of the problem.

I realized I was spending way too much of my day with my head and arms jutted forward, like driving, typing, writing, and even sitting on the couch. As a result, I switched up my seat positions in the car, switched up my work station, and started sitting on the ground much more of the time. I also made it a priority to stretch throughout the day and do yoga on a somewhat regular basis.

All this helped immensely.  But one day, an idea hit me that I hadn’t given much thought to previously: I was forgetting to consider a MAJOR part of my day…the time I spent sleeping.

If I was waking up with a crink in my neck–which I frequently was–I’d spend the rest of the day trying to undo that damage and minimize accruing any other problems. This seemed like a losing battle I was playing.

So I started a big overhaul of my sleeping situation.

I had already learned that with alignment, as with food, making huge changes quickly can lead to more problems than the ones solved, I decided to create a step-wise plan to attach my pillow addiction.

I say pillow addiction because I was sleeping with two pillows behind my head, a pillow between my knees, and a pillow propping up my arms. Yes, I know that that’s a whole lot of freakin’ pillows.  The end result of all these pillows is that I would sleep in pretty much one or two positions all night that held my neck in a weird position and kept my back stiff.  No wonder I was waking up all creaky.

I started first my removing one of my head pillows and replacing it with a folded up sheet.  It took me a few nights to get used to it but I was good to go after a while.  I then attempted to remove that folded up sheet…for about 2 months.  I just couldn’t get used to it! But it did finally clicked. (I think a particularly taxing week at work finally did it because my body and brain were too tired to fight the pillow situation.  Not that I recommend stress and fatigue as a way to make it happen.)

A month or so of just using one pillow brought some great changes.  I was finding myself waking up in all sorts of sleeping positions and I was waking up feeling way less stiff.  Not surprisingly, my headache frequency and severity improved at the same time.  Take that, ibuprofen.

Next to go was my arm pillow.  I used to think it was helping keeping my arms in a more neutral position but after getting rid of it, I was finding that my upper back and neck were much more mobile in the morning.

Lastly, I’ve transitioned for one head pillow to a folded up sheet again and can honestly say that I’m sleeping better now than I have since I was a kid.  Headaches have been nearly non-existent for me lately and I can usually manage them now by some really good stretching and a heatpack.  (Side note: I will take ibuprofen or tylenol if I really need it. I don’t believe in withhold medicine just to be dogmatic about it.)  Eventually, I’ll probably just switch over to nothing at all…and I’m curious to see what changes that will bring.

My last frontier is my knee pillow, which I haven’t addressed yet…though I often wake up with it on the floor next to the bed.  Knobby knees be darned but I just haven’t been able to switch over to falling asleep without it. My plan is to next switch it out for a folded up sheet before transitioning entirely.  I’m guessing this is another change that will take a while. But that’s ok.

Let me say, to wrap this whole idea up, that I don’t have anything against pillows in the general sense.  If you’re waking up well-rested without any neck, back, or head pain then by all means, stick with what’s working.  But given the prevalence of spine-related pain in the general population, I think it’s an important idea to bring up in everyone’s minds because we just don’t think about it all that often.

I also really like Katy Bowman’s article about how pillows can be thought of as orthotics.  And her website just rocks in general.

Eventually, I’ll be doing an overhaul of our entire bed.  But I first have to convince my husband…