Why There’s No Such Thing As Pregnenolone Steal 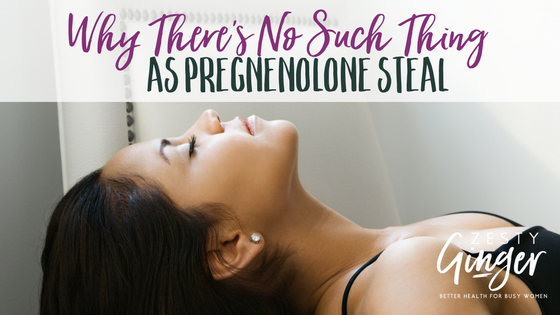 Like most teachers, we usually end up teaching about the things we’re struggling with ourselves. The concept of pregnenolone steal has been around for a few decades–and it’s how we learned the interaction between the commonly observed stress-induced sex hormone dysfunction so commonly seen in women.

And it’s an idea that has always made sense to us.  After all, since hormones in the liver, adrenals, and sex organs all share common precursors, it’s reasonable to think that the shuttling of those precursors to make a certain compound (cortisol) will come at the expense of other compounds (estrogen/progesterone). If you’re not familiar with the concept of pregnenolone steal, read this older article we wrote on “adrenal fatigue” (now called HPA-dysfunction).

While it remains true that elevated cortisol from stress and other factors and a drop in DHEA w/ other downstream hormones characterize HPA-dysfunction at the early stages, it hasn’t quite panned out that this is because cortisol is “stealing” precursors from other hormones, such as the sex hormones. For one, the creation of the different hormones happens in different parts of the adrenals. Specifically, pregnenolone is made in the mitochondria of the zona reticularis and the sex hormone precursors are made in the mitochondria of the zona fasciculata. (We can see your eye glaze over with the medical mumbo-jumbo: just know that the hormones are made in discrete parts of the adrenals that apparently don’t share a “pool” of pregnenolone.)

Sure, it makes sense that compounds can travel at mind-boggling speeds in the body (think of nerve conduction speeds!). But for reasons that haven’t quite yet been established, this doesn’t occur at the level of the adrenals…but it likely was created as a protective strategy for the exact reason we’re discussing here.

The best explanation we’ve heard so far is that the regulation of both cortisol and sex hormone precursors are largely determined by the area-specific enzymes and extra-adrenal (that is, other places in the body outside of the adrenals) signaling molecules that interact with these chemicals.

While it’s still true that an increased cortisol response decreases DHEA and down stream hormone production, it’s likely through a cascade of signaling molecules that are responding to the overall state of the body, and not specifically what’s going on at the levels of the adrenals. For example, high blood glucose, insulin resistance, and a pro-inflammatory state (through IL-4 and other cytokines, if you’re interested) have been studies as a mechanism of this phenomenon. But there are likely thousands of different processes and molecules that are involved in this entire process.

As you can see, the difference between pregnenolone steal and the updated model of thinking is actually quite subtle.  And the end result that you’d see on your tests (like if you’re going through our Healthy Hormones Group Program or doing testing as part of your ZestyU one-on-one practitioner experience) will still be ultimately the same.

However, it is crucial to understand in a more accurate way the underlying mechanisms behind WHY things happen so that we can more effectively moderate how we feel day to day…which is intended by our bodies to be AWESOME!