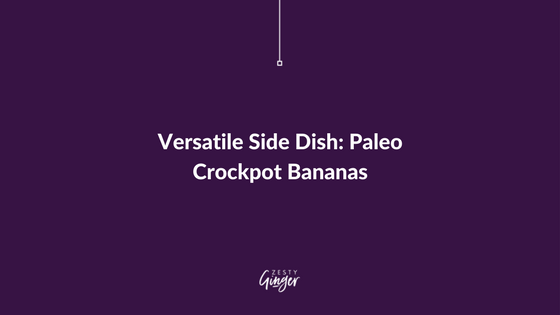 Sometimes you really need a versatile carb-y paleo recipe.  I know in the beginning, I was doing way too many sweet potatoes and Mr. Dig and I both kind of got sick of them.  This is a good alternative to sweet potato recipes because a) bananas are also a good carb source and b) they can be made into savory or sweet recipes with equal success. The coconut oil I used in this recipe was getting retired from several batches of fried bananas and plantains (with or without primal homemade whipped cream! yum!).   I had learned from The Paleo View (check out on itunes…great stuff!) that you can reuse oil that you fry in for several batches and I was doing so with great success (so much less wasteful than using 6 fresh tablespoons of coconut oil each time).  I felt, however, that my current coconut oil batch was nearing the end of it’s lifespan and that I had better put it to rest in a great recipe.  Hence, these crockpot bananas were born!

The other benefit of this recipe is that it’s very hands off, thanks to the use of the crockpot.  I had maybe 10 minutes of work in the kitchen and about an hour and a half of spelling cinnamon-y, banana-y deliciousness wafting out of the kitchen (I guess that’s hard work, right?).

1.  Place your coconut oil, coconut milk, cinnamon, salt, nutmeg, and vanilla extract into your crockpot and turn it on HIGH.

2.  Allow all of the crockpot ingredients to melt and combine, stirring every so often…about 15-25 minutes, depending on your crockpot.

3.  While the crockpot ingredients melt, slice up your bananas into thin slivers.

4.  Once your crockpot ingredients are melted and combined, add in the bananas to the crockpot.  It’ll look something like this:

5.  Simmer everything on HIGH for about 45 minutes.

6.  Once you’ve turned it on LOW, let mixture stew for another hour or so.

7.  At the end of the hour, turn off the crockpot and transfer the bananas to a heat safe bowl to cool.

These can be eaten at breakfast, lunch, dinner, or just as a snack.  I’d suggest trying them with a slow-cooked pot roast or some bacon for a savory side dish or heated up with some chocolate chips for a delicious dessert!