Why we use functional lab work 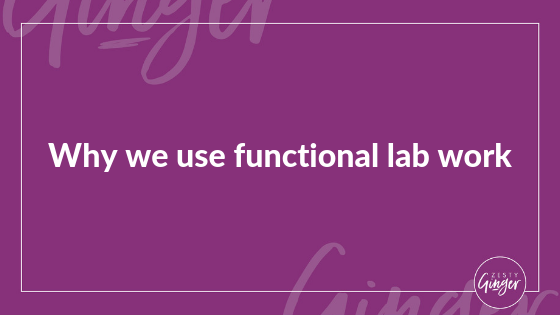 The best way we’ve ever heard conventional medicine summed up is that Western medicine will help you stay alive, but it won’t help you live. We’ve found this to be true, both in our own lives and through countless patient encounters.

Functional medicine, as we see it, builds on all the good stuff from the conventional world, but goes much further into assessing how well each individual system of the body works (and how they all work together).

The awesome-ness of Western medicine is most obviously apparent in some of the more extreme life-saving measures that we have available to us. Total artificial hearts, advancements in organ transplantation, and trauma support all undoubtedly save lives. And everything from better diabetes management to infection control is helping people worldwide achieve longevity.

The problem starts when you meet all conventional metrics for “good health”…except that you horrible and no one can tell you why.

The Problems with Conventional Medicine

This all-too-common scenario ends up being really frustrating for both doctors and patients. If your labs look good and all your imaging is normal, then there’s barely any pertinent information available to make a diagnosis. And without a diagnosis, there’s not enough guidance to learn about the symptoms.

Doctors end up feeling like failures because they’re not able to help their patients and patients are devastated because they feel like no one can help them.  After spending decades under the care of well-intentioned providers, it’s not uncommon to see patients who aren’t much better than when they first started out.

It is part of the reality of taking care of humans. There are going to be some people that don’t get better, no matter what you attempt. But our failure rate of getting people out of the intolerable-symptom territory and into freely-living-life mode is shockingly high. “What next?”-”More of the same” conversation is something us doctors pick up in residency.

Doctors deal with the pitfalls of conventional medicine in one of 3 ways. You’ve almost certainly met the cynical physician who has learned to block emotions out due to the inability to deal with them. The second group is made up of the hopeful optimists. These are the doctors that believe that if they try hard enough, and stay long enough hours at the hospital, they can make everything work out through the tools and resources available to them.

Functional medicine draws the third and final group; the doctors who look around and think, “There’s gotta be something better than this.”

As the name implies, the goal of functional medicine is to see how well each organ system is working in the body and assess how they all come together. This process requires lab work that tests for precursors, by-products, and metabolites of important compounds we often care about, such as cortisol or sex hormones.

By looking at multiple steps along an organ system, we can draw certain conclusions about where problems are occurring. Luckily for all of us, there have been generations of PhDs looking at biochemical reactions in the body, and what compounds could theoretically be used to support them.

The pitfall of functional medicine lies in that pesky “theoretically” word.

Plenty of studies were done in animal models and inside labs, but studying biochemical reactions within living humans is just now getting underway.

The health supplement industry hasn’t exactly been helpful, a world where you can sell dirty water and market it as the answer to people’s allergies. It’s the polar opposite of how the FDA oversees pharmaceutical companies; the race for the newest drug actually fuels and funds a substantial amount of research that gets done on medical conditions and their treatments.

It’s hard to draw meaningful conclusions when what you’re working with isn’t closely regulated or standardized. And it’s even harder to do research when there aren’t entities willing to pay for getting it done. (Again, this is, fortunately, starting to change.)

Additionally, the amount of data you get when doing functional lab work is pretty hefty; more information is the draw to this type of testing, after all. But more data means more opportunities for the individual test results to be incorrect and health care providers struggle with this kind of ambiguity.

Because of this limitation, providers who get functional lab work tend to focus more on trends and ratios of compounds and slightly less on the raw numbers themselves. By testing parts of systems from several different approaches, we can often “double check” results by seeing if the entire picture makes sense.

Although the outlook on functional medicine and testing is a little bleak at this point, the industry is actually growing rapidly year by year, with rising public interest suggesting that more patients will make the decision to work with unconventional providers over the next decade.

Suffering patients who have previously been told that their conventional labs were “normal” often get confirmation of their symptoms through functional lab work. It’s a huge “ah-ha!” moment! Many functional providers tend to find that this type of testing and problem pinpointing leads to greater patient satisfaction and improved long term provider-patient relationships.

This is fascinating because we haven’t even gotten to the fact that more comprehensive diagnostic testing often also means that there’s a wider array of available treatment options!

Turns out, there’s a certain amount of comfort patients derive from understanding the reason for their symptoms. Additionally, knowing that your provider cares enough about you not to blow off troublesome symptoms is often enough to make many patients feel more comfortable about their overall health.

Humans can adapt to almost any physical abnormality, but our brains don’t handle unnamed fears very well at all.

What if it causes something worse?

Let’s take a look at testing for and treating low cortisol as an example, which is a commonly replaced hormone within conventional medicine.

Most conventional MDs will order a morning cortisol level to determine if a patient is deficient in cortisol. If it is low and/or the reason for the issue is unclear, they will try giving a medication that is known to stimulate the release of cortisol from the adrenals. If cortisol goes up in response, they know it’s not a problem with the adrenals themselves, but a problem with getting the right signal to them. If the cortisol remains low, they can deduce that the problem is likely occurring within the adrenal glands. Regardless of where the problem is the answer to low cortisol in the conventional world is always to replace cortisol through a pill.

Functional lab work gives information about molecules created and regulated all along the signaling cascade that creates cortisol, from the hypothalamus to the pituitary and to the adrenals. It indicates what happens to cortisol once it’s active. Functional testing lets us know if the cortisol is getting inactivated properly, and if it’s being successful eliminated from the body.

Functional lab work can tell you if cortisol precursors are shuttling into another cascade due to an ongoing problem elsewhere.  This can be from uncontrolled inflammation, gut infections, poor liver detoxification, or signaling dysfunction within the central nervous system.  The goal isn’t to get a better idea of where the problem is occurring so you can still just end up giving cortisol. Instead, the goal is to support the reactions of the body so it can make the right amount of cortisol on its own.

Getting Off Supplemental Hormones

This type of testing becomes even more important when patients are getting off supplemental hormones, such as cortisol or birth control. Conventional medicine will test for morning cortisol, and say you’re okay if it’s within the normal range, even if you have horrible symptoms. Functional medicine can help localize where the cortisol signaling pathway needs support so the output of the adrenals can return to normal, thereby getting rid of the aforementioned miserable symptoms and the need for ongoing cortisol supplementation.

(Side note: If functional practitioners catch patients early, they can sometimes prevent people from having to go on these medications in the first place. But currently, many people are finding functional medicine only after conventional medicine has failed to make them better.)

For some patients, it’s a matter of helping to metabolize excess supplemental cortisol enough so the hypothalamus and pituitary can get the message that levels are low. This kicks the organs into high gear to make more of the body’s own cortisol and leads to rebalancing over time. For others, it’s a matter of addressing causes of uncontrolled inflammation, which will blunt the function of the body’s intrinsic endocrine system, leading to lower-than-normal cortisol production.

Hopefully, you can understand why functional lab work is really helpful in differentiating these 2 problems!

Sure, all these patients may have cortisol that is “in range” with a morning blood cortisol level. But the reason why it’s coming up that way can be drastically different between individual humans, and the interventions that each patient needs will be unique to their underlying physiologic issue.

This is why we love the DUTCH test so much! (This is a dried urine test, and we use it to create the individualized protocols for our ladies inside the Healthy Hormones Group Program.)

However, we don’t consider our testing complete, unless we have also taken a detailed look at the signal that the hormonal system is getting from the central nervous system.  You could supplement with sex hormones and cortisol ‘til kingdom come, but the issue will never resolve if the endocrine system is constantly receiving distress signals from the brain and spinal cord. To learn about how this system is working, we get saliva neurotransmitter levels simultaneously with the DUTCH test.

With this information (and a full inventory of presenting symptoms), we can create a protocol that is highly individualized to the physiology of each person.

Additionally, because we are supporting the built-in functions that the body already has in place, it’s possible to get the body to recover without having to take pills and supplements forever on end.

The human body is programmed to heal and regenerate, but it only happens with the correct support at the right times.  Without good testing, you’re left playing a miserable guessing game where good outcomes are statistically unlikely.

How We See Our Roles

As the demand for functional medicine and lab work increases, the conventional medical community will be nudged to keep up with this progress and change will occur over time. Conventional medicine doesn’t have a great track record of adapting quickly; many scientific discoveries take decades to incorporate into patient care, and discredited theories can take years to flush out of the medical collective conscious.

Until we learn to merge these two worlds on a larger scale, individual practitioners must not only help patients prevent life-threatening conditions but provide them with the tools necessary for living a happy and satisfying life.

We feel strongly about merging both conventional medicine and functional testing within our approach to female health issues. After playing the guessing game for years on end with ourselves, we’ve now dedicated our careers to helping women resolve their symptoms faster and more efficiently.

Our belief in functional testing as a cornerstone to hormonal imbalances is precisely why you’ll hear us talking about testing over and over in the rest of the series that follows.

Upcoming topic In the Series

Up next, we’ll talk about what testing you can get at your primary care doctor under insurance and what you can get via functional testing (sometimes also through insurance if you have an HSA).